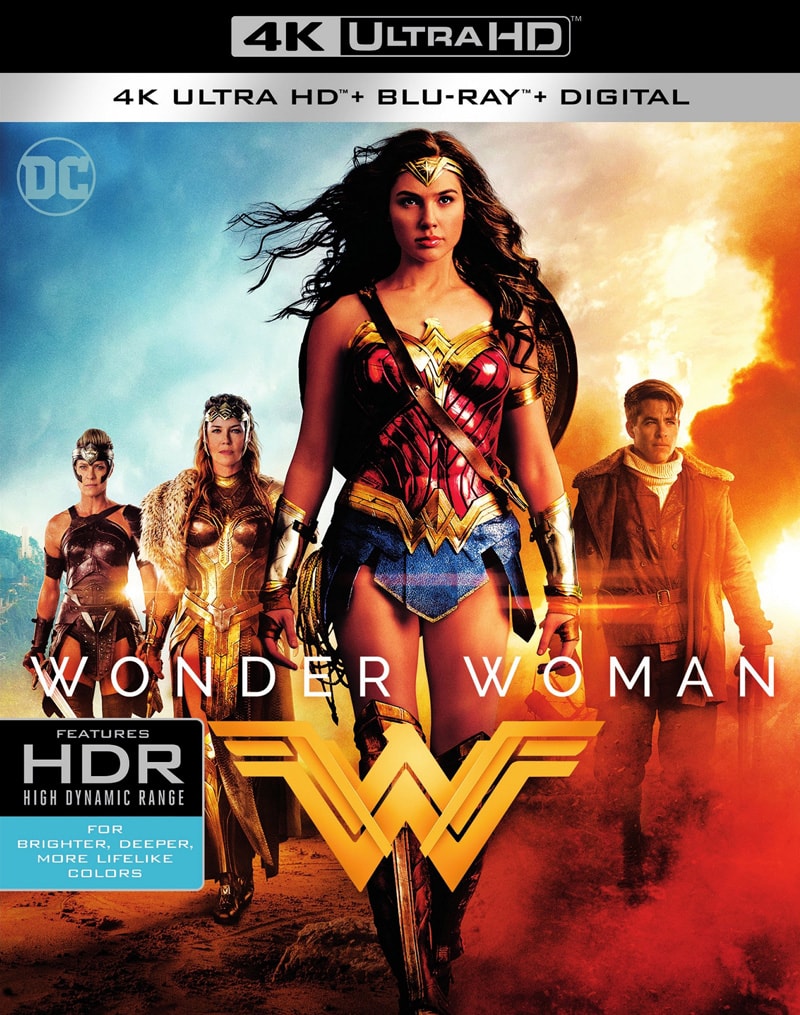 USA | China | Hong Kong | UK | Italy | Canada | New Zealand Movies / Adventure 4K
Producer: Patty Jenkins
Cast:Gal Gadot, Chris Pine, Connie Nielsen, Robin Wright, Danny Huston, David Thewlis, Sad Taghmaoui, Ewen Bremner, Eugene Brave Rock, Lucy Davis, Elena Anaya, Lilly Aspell, Lisa Loven, Ann Wolfe, Ann Ogbomo...
IMDB 7.7
File Size 72.59 GB
Film description
Taken from IMDB.COM
Before becoming Wonder Woman, she was Diana, an Amazon princess trained to be an invincible warrior. And when an American pilot crashes on the shores of a paradise island that served as her homeland, fenced off from the outside world, and tells about a serious conflict raging in the outside world, Diana leaves her home to cope with this threat. And there, fighting side by side with man in the war for peace, Diana will discover the fullness of her power ... and her true destiny.

4k movies reviews
Savior
Many will argue that this is the best DC movie since The Dark Knight. Many will call her the 'best superhero of the year'. Many will write that, finally, women also got a chance to put on a leotard (in this case, a metal bra) and superhero on the big screen.

Wonder Woman is, first and foremost, a quality movie. Many were impressed with Gal Gadot's performance in Batman v Superman, directed by Zack Snyder, and noted it as one of the film's positives. Believe it or not, she performs just as well here! And even better, because she has a chance to reveal herself as a character, and not just parade around the locations of action-packed battles (although this is enough here). Of course, a lot is tied to Gal in this picture. On how much she is suitable for the embodiment of this image. I remember there were times when there were many indignant that, you see, Gadot had small breasts. Where are these critics now, I'm afraid to even ask, considering what this Wonder Heroine is doing with enemies in her solo project.

But just like Gadot herself, this painting is based on a masterful technical execution. Here I would like to say thank you, first of all, to production designer, two-time Academy Award winner Aline Bonetto. Throughout the entire viewing, I did not leave the feeling of familiarity of the situation in the film, and not without reason - it turned out that the same artist also furnished one of my favorite films from a visual point of view, 'The Long Engagement' and 'Amelie'. Lindy Hemming, who has worked on costumes in several of Christopher Nolan's films, is not far behind in terms of skill level. The work of these two amazing ladies is professionally captured by cinematographer Matthew Jensen (how I love his shot here!), Martin Walsh is equally professionally editing (editing can also be called a strong point of the picture), and all this is under the strict guidance of the chief executive of the celebration, director Patty Jenkins. Oh, what are these people doing on the screen! This is a must see, believe me.

The cast plays brilliantly. I have already written about Gal Gadot herself, she perfectly matches her image, while not only posing, but also playing. Right there you and Robin Wright with Connie Nielsen in their vivid images. Chris Pine, who was so tirelessly predicted to play the role of Green Lantern, did a wonderful job of the role of 'love interest' (which was previously played by purely women). David Thewlis ... did anyone really believe that an actor of this caliber would play a simple politician? But despite the fact that I liked his line, I didn't really like how he was treated closer to the final. But he played excellently, as always! I also really liked Danny Huston's game and his character. Although, on the other hand, Dr. Poison could have worked more, because it turned out to be a typical villain of the second plan. Anyway...

What's the secret of Wonder Woman? Do you just have to do your technical job and hire good actors to be successful in the superhero arena? As practice shows, no. What is needed is what is so often lacking in superhero films: a good script. It was at 'Logan', which came out just a couple of months ago (and it seems as if it was so long ago - another confirmation that the film has already begun to become a classic).

Does Wonder Woman have it? Yes and no. The script is definitely better than most Marvel films. But DC already has pictures that will prevent a new movie based on their comics from being called 'well written' ... and you know what they are called and who made them. But if you take them out of sight, then 'Wonder Woman' is quite good for itself as a story about a woman who wants to make peace through war. Although the theme is still the same that was voiced back in the dusty 'Spider-Man' by Sam Raimi (yes, the same one about great strength and the same great responsibility). Can peace be achieved through war? Can people posing as peace-loving natures be cruel, furious monsters at heart? It would be interesting to speculate on all these questions in a dramatic film, but Wonder Woman does not go deep into them, and leaves their study at the level of, in fact, an ordinary comic book film.

From ambiguous to cons. Personally, that's what I think of music. Compared to the original part of Hans Zimmer, the new compositions do not really stand out. Yes, they create an atmosphere, but they are more of a background for what is happening on the screen. Although, the visuals in this film are already doing well, not particularly needing the help of a powerful soundtrack. Rupert Gregson-Williams wrote good soulful melodies with a bit of drama, but he is certainly far from the groovy, dynamic melodies that Zimmer writes, despite possible efforts.

But in general, both the minus in the form of music and not particularly strong drama do not prevent 'Wonder Woman' from being, as I wrote at the beginning of my review, an excellent fantastic action movie with fantasy elements, which is definitely worth going to the movies. And I advise you to watch this picture in IMAX format, or just on the largest screen available: this sight is worth it!

Wonder Woman is a movie that fans of movie comics should never miss. Especially for those who are tired of the dark and pessimistic style of DC comics films. Patty Jenkins' Wonder Woman is more of a classic superhero by Richard Donner than Christopher Nolan's modern urban realism or Zach Snyder's dark pessimism. Although I do not think, like many critics (of a snobbish nature), that this is the first good film of the DCU, since I liked both 'Man of Steel', and even, to some extent, 'Batman v Superman', sort of he was not scolded by both fans and ordinary viewers. But I understand why Wonder Woman was honored to become such an object of admiration, and I myself fully adhere to the admiring crowd, chanting: