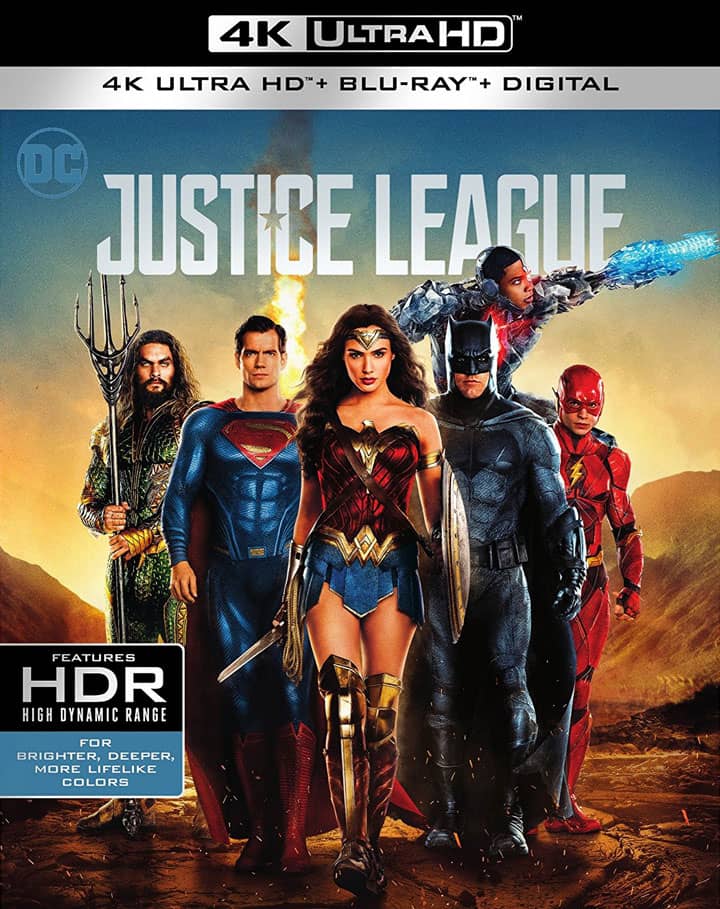 Story Movie
Fueled by his restored faith in humanity and inspired by Superman's selfless act, Bruce Wayne enlists the help of his newfound ally, Diana Prince, to face an even greater enemy. Together, Batman and Wonder Woman work quickly to find and recruit a team of metahumans to stand against this newly awakened threat. But despite the formation of this unprecedented league of heroes-Batman, Wonder Woman, Aquaman, Cyborg and The Flash-it may already be too late to save the planet from an assault of catastrophic proportions.

Justice League 4K Review
Justice League felt like going through a list of specifications with no identity whatsoever. It's not a bad movie per se, it's just extremely dull. Of course there's nothing new in the photo department but that's to be expected, it's kind of an identity for the whole DCEU. I don't like it but hey, that's an artistic choice I won't criticize here, at least it's coherent. But some flaws are more crippling than that.

Every single characterization was a bit off and some of them felt like they were forced, especially Barry Allen. Still, the actors do the best they can with the material so it's not unbearable.

Every situation (and even the chain of events) is so predictable (clich even) that it gets you out of the movie. This level of "nothing new" is damaging to the story as it stops you from caring about anything. And it seems like the producers knew this cause they threw in the mandatory helpless family so that you could sense the danger a bit more. After all, it's just the end of the world, how could you care if there was no kid in immediate danger ? Oh wait... Still, even that falls flat as their scenes (and they're not the only ones) are filled with incoherent behaviors that were put there just so that the plot can go forward.

I attended a screening where the only bursts of joy (or emotions at all) occurred when a new character appeared. Kind of a "fanboy effect" that fills you with hope at the sight of one of your beloved comics characters. But the rest of the time, everyone was quite bored and numerous sighs were heard. In a sense, it reassured me as I understood I was not the only one who was disappointed in the movie.

Plus, something else bothered me. But I know everyone won't agree on this one cause it's kind of a speculation. All the points above still stand even if I'm wrong about it. So here it is : Justice League felt like it was a failed attempt to adapt the Avengers in the DCEU. And I'm not talking about the strangely similar theme. Nor am I referring to the tension inside the team before they reconcile that felt like a watered-down version of what we saw in the 2012 movie by Whedon. But the characters are bent so that they match their Marvel counterparts. The Flash takes the place of the slightly weaker and wisecracking Hawkeye, Aquaman clearly corresponds to Thor with his royal and out-of-place persona, Wonder Woman goes through the same soldier- leader dilemma as Cap did and even Batman is slightly changed so that he's closer to Tony Stark (making decisions that make absolutely no sense for the world's best detective that we all know and love). That's a shame cause DC characters are interesting and have a lot more to offer than a mere copy.

With this movie watching: Aquaman 4K 2018