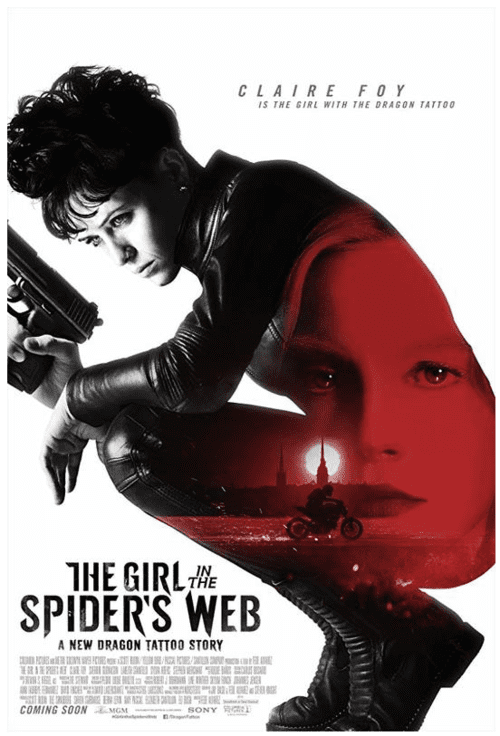 4k movies reviews
We were promised a continuation of the stigma “Millennium” by Stieg Larsson, known to many from the screen versions of the book “The Girl with the Dragon Tattoo”. Fans were waiting for atmospheric crime drama with elements of a spy thriller. What did we get in the end? Uncomplicated budget parody of James Bond with the evil Russian and the Swedish "battvumen" on Lamborghini, saving the world from disaster.

This is one of those films where disguised spy bugs are necessarily equipped with flashing lights.

Where secret files are necessarily printed on paper, and paper for some reason does not burn in a fire.

Where the killer does not hide his tattoos in front of the cameras, and being wounded, he leaves the wounded person with blood samples at the crime scene. Why not a passport right away, what is there?

Where the hero, using a regular smartphone, can get control over anything in half a minute, from driving in front of the car to the door locks at the station. And using a laptop to crack the NSA's top-secret servers and gain access to the control of nuclear weapons from all countries of the world. What trifle?

Where a gas mask torn from an opponent on a hero immediately begins to be highlighted in a different color so that the viewer does not confuse him with the villains.

Where the lurking "ghost" can wear a bright red dress and go on the job in heels. Where the villain will necessarily tell about his villainous plan, and the outcome will come at the top of a cliff, on the edge of the abyss.

Is there anything in the film worth seeing? Yes, I would highlight the stylish visuals and atmospheric music. I did not find any other advantages.

Who might be interested in this film? Fans of the original Stig Larsson trilogy, who are not afraid to give up on their expectations of its continuation. Lovers of beautiful, atmospheric cinema, not burdened with logic and meaning. Lovers of uncomplicated detectives and spy serials of the 60s, with linear plots and the absence of any intrigue.

The film will come down in order to pass the time on the road or serve as a background for cutting salad in the kitchen, but does not pretend to anything more.

If you have not heard about the Millennium trilogy, it’s better to begin acquaintance with her in the movies “The Girl with the Dragon Tattoo” of 2009 or 2011.
We now have