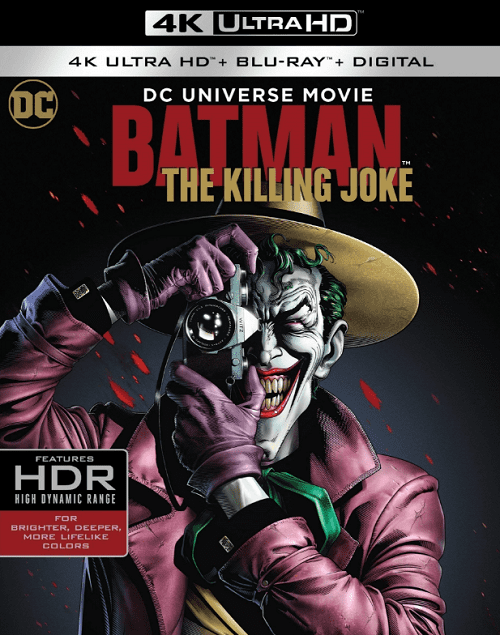 USA Movies / Animation 4K
Producer: Sam Liu
Cast:Kevin Conroy, Mark Hamill, Tara Strong, Ray Wise, John DiMaggio, Robin Atkin Downes, Brian George, JP Karliak, Andrew Kishino, Nolan North, Maury Sterling, Fred Tatasciore, Bruce Timm, Anna Vocino, Kari Wahlgren...
IMDB 6.5
File Size 45.10 GB
Film description
Taken from IMDB.COM
Batman: The Killing Joke 4k animation cartoon for download. Batman appears in the clinic Arkham, where he finds out that the Joker managed to escape from the guard. This dangerous patient was under surveillance, but now his functions to entertain the clinic are transferred to another. He in the role of a clown, not aware of the consequences of what is happening. The joker is free and intends to show others what he is capable of. Those who thought he was insane were mistaken. The world around has gone mad, and the Joker has his own plans and ways of implementing them. The amusement park, long inoperative, was bought by a fugitive from a clinic for a penny. This is the first step on the way to a dream. James Gordon becomes assistant to the Joker. Why him? Gordon personifies honor and morality in Gotham, rotten through ... Movie of Batman: The Killing Joke 4K 2016 for download now. Update 2018.09.17

"Batman: The Killing Joke 4K" - this is a screen version of the same graphic novel by Alan Moore and artist Brian Balland, who has already become legendary and managed to turn the universe "DC comics" upside down.

The plot of this cartoon can be divided into two parts:

First part. In the first half of the 4K movie tells the story of Batgerl and her relationship with Batman. Barbara tries to be closer to Bruce, but he pushes it away, because he wants to save. Then, after these disputes, something dawns. This part was not in the comic book of Alan Moore, and I do not think that she was so important in the cartoon. But whether she has given something new or not, it's up to you to decide.

The second part. From the second half already there is a retelling of the comics. Each frame is torn from the graphic novel, and this gives a big plus. This part tells how the Joker once again escaped from Arkham and with the help of James Gordon, wants to prove to Batman and the whole of Gotham that a normal person from leaping into the abyss of insanity separates only one bad day. And in the course of the second part, we are shown one of the versions of the appearance of the "King of the underworld". In my opinion, this is one of the best versions of the appearance of such a mysterious character.

And of course you can not fail to mention the wonderful voice acting from Mark Hamill and Kevin Conroy. I'm very glad that these guys came back to sound Batman and Joker again. Personally, I, after viewing in Russian, looked the original for pleasure.

The result. Stunning voice acting, the frames are well transferred from the pages of the comic book, but the drawing is very lame, as in all the other cartoons from "DC". "Batman: The Killing Joke 4K" like a lot, but I think if there is time, it is better to read the comics, and then watch the cartoon.

Blu-ray 4k movie of Batman: The Killing Joke 2016 for download on your PC or UHD TV.