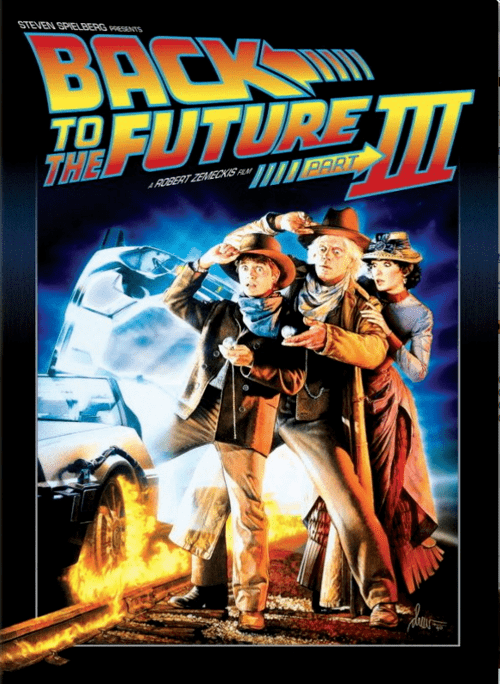 This journey, like all the previous ones, is not complete without dangerous adventures, but the brave Marty, risking his life, prevents the tragedy in the life of Emmett Brown. He, in turn, falls madly in love with a charming stranger, whom he saves from death, and the trip home - to the future - loses all meaning for him ...

4k movies reviews
Sorry ... The layout is rough ...
No, not rude, Doc. Very elegant and believable. Never in my life, either before or after, have I had to deal with such a natural cinematic embodiment of my own childhood fantasies about something not entirely understandable, but terribly interesting.

Closer to the third film. Seemingly having successfully resolved the problems with the return of the normal course of time in the second part, the heroes unexpectedly part - Doc disappears from a lightning strike in a time machine and is transferred to 1885. Marty, with the help of young Emmett Brown, must put DeLorin in order to save the elderly Doc from death already made in Hill Valley history. This is followed by a fascinating and cheerful kaleidoscope of Wild West life, flavored with a romantic story and unchanging humor that does not leave the heroes even in the most tense situations.

But enough about the plot. There is no point in talking about the actors either - their excellent acting has already been reflected in numerous reviews of the trilogy. I would like to highlight three small points that made this film special for me, one of the few favorites that I will be revisiting in 30 years. They do not belong to the main course of events, but such chips are the hallmark of the highest quality films.

Number of times. A celebration in honor of the opening of the Hill Valley city clock. A wandering orchestra of bearded people, dancing couples from the nascent intelligentsia, the first attractions (shooting from the first Colt revolvers), horses, mud and cowboy bandits - this is how I imagined the Wild West.

Number two. The police chief. An inconspicuous character, but how elaborate it is! This is how an American sheriff should be - strict, hating criminals, but fair to such an extent that he cannot refuse to let Tanen go to the holiday - after all, he has not done anything yet, although he is generally known as a notorious villain. 'Discipline, son, remember this word! '

And, of course, the strongest impression. Its beginning. When a Western Uninon courier brings Marty a 70-year-old letter from Doc from Doc. IT'S DELIVERED! This is the quint-essence of real America, its squeeze. Like the Amerikan express signs in Maverick. Or the moment with the search for one soldier in the Ebon Hawk. How many events have happened in the world, great empires have collapsed, the world has changed beyond recognition - and the will of a long-dead eccentric was strictly carried out.

It is worth confessing that I love America. As a land of ideals. And this film is about an ideal America and real Americans - brave guys, crazy scientists, dreamers, scoundrels, murderers in the back - all those who find it difficult to live in their usual conditions. Who was once pushed to the Border, the one that the guy from Route 60 was talking about - to look at it, and what is behind it? And behind it is the Future, not yet written. Let's write it together.