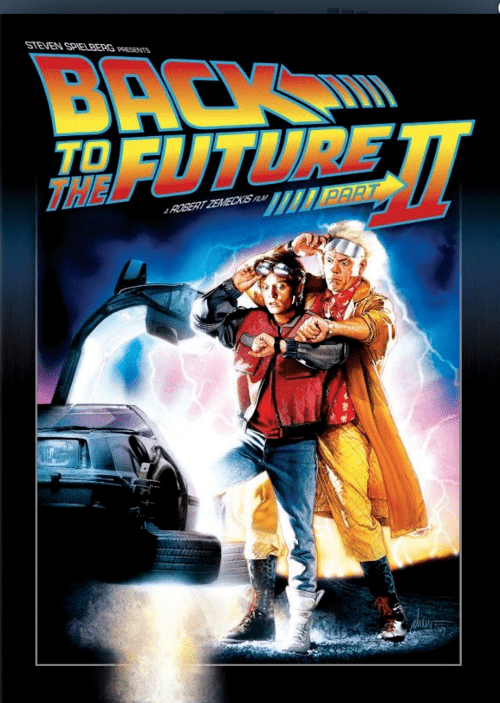 Marty's kids are in trouble and need help. We have to tinker with the villain ...

4k movies reviews
And again Marty and again Doc, again these funny and already classic time travel. In this film, the heroes will have to visit the future, past, present and again the past. In the future, everything is bad - problems with Marty's children, whose son was born right into his grandfather, and his daughter was the spitting image of Marty (by the way, an excellent joke of the writers and Michael J. Fox).

Rarely does a sequel turn out to be great and even surpasses the prequel in some moments. Back to the Future II is a great sequel. More dynamic and confusing. The trick of the film is that the second part overlaps with the first. It becomes possible to see the prequel from a completely different side, from a different angle. Great idea for the writers.

The film perfectly conveys the atmosphere of the 50s, as in the first film, but still the main merit of the decorators and artists is the atmosphere of the future. Who knows what will happen in that ... 2015. Maybe, in fact, cars will finally rise up ... What is the future? In this film, it appears to be modernized. TVs with six channels in parallel, cars moving only through the air, children who have long forgotten about skateboards and ride, or rather, flying on hydro-boards (by the way, which were actually created, but parents were afraid for their children). What is the future like? Not so fantastic. There are no humanoid or alien creatures here. Everything is almost real here.

Christopher Lloyd and Michael J. Fox are great as always. Only this time Fox plays four roles at once: Marty, Marty 30 years later, his daughter and son. You believe him again. You believe when he plays a rag, you believe when he plays the limp and unsuccessful Marty, the father. Believe me, when he plays his daughter, and, to be honest, I myself did not notice from the first time that it was Fox. Well, and of course, again the enthusiasm and charm of McFly himself. Dr. Brown is now a more emotional and slightly rejuvenated inventor. Lloyd shines again. Once again, charisma and his comedic talent play a role.

Back to the Future II is an amazing movie. Cinema about the future, past and present. The movie is about looking at life from the other side. Zemeckis created another masterpiece after the second part. Brilliant directorial, acting, cinematography, favorite music by Alan Silvestri, makeup and a more dynamic script. Zemeckis created a masterpiece again. Great sequel!