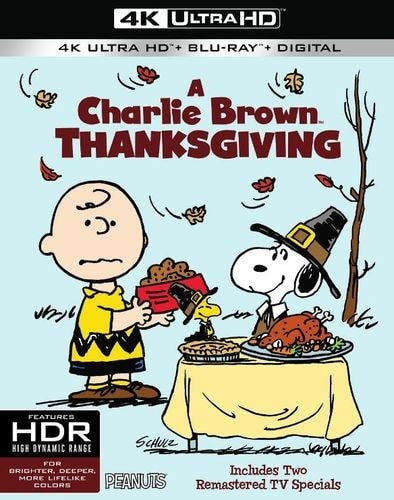 As for the rest of the cartoon, I thought Peppermint Patty was bossy and rude to Charlie Brown, inviting herself, Marcie and Franklin to Charlie Brown's for Thanksgiving dinner, monopolizing their phone conversations and even worse, complaining about the nontraditional cuisine. She was also flirtatious toward Charlie Brown. There were also outstanding sight gags involving Snoopy and Woodstock and the scene where they get the food ready for the feast that's set to "Linus and Lucy." It proves that cartoon scenes can work well without dialogue.

I also liked the scene near the end when the kids are in the car and they sing "Over the River and Through the Woods" en route to the Brown's Grandma's condo for a real Thanksgiving dinner. Before or after you go over the river and through the woods for your holiday feast, watch this cartoon. You'll even learn about the holiday in Linus' Thanksgiving prayer.