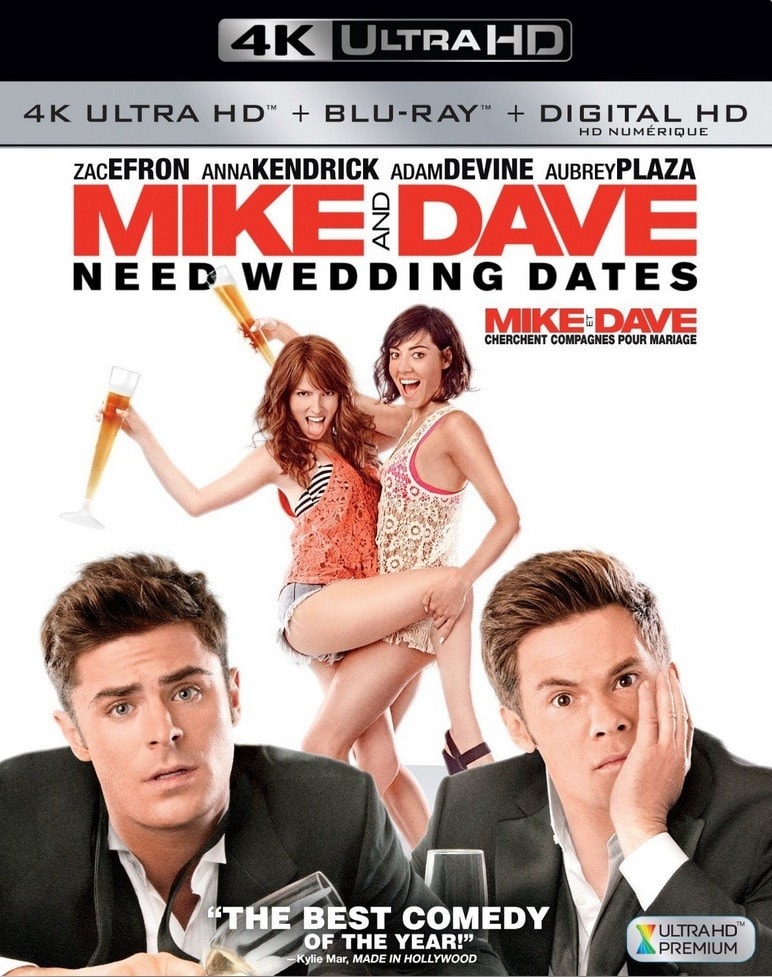 USA Movies / Comedy 4K
Producer: Jake Szymanski
Cast:Zac Efron, Anna Kendrick, Adam DeVine, Aubrey Plaza, Stephen Root, Stephanie Faracy, Sugar Lyn Beard, Sam Richardson, Alice Wetterlund, Kumail Nanjiani, Jake Johnson, Marc Maron, Wendy Williams, Branscombe Richmond, Chloe Bridges, Lavell Crawford
IMDB 6.0
File Size 30.25 GB
Film description
Taken from IMDB.COM
Brothers partymakers Mike and Dave give on the Internet an announcement about finding couples to go to their sister's wedding in Hawaii. They hope for a wild break, but the duet of girls chosen by them turns out to be completely uncontrollable, ready to turn the holiday into a real hell.
Read More:
Brothers Mike and Dave Stangle are liquor salesmen whose antics ruin their family's gatherings. With their younger sister Jeanie's wedding in Hawaii approaching, their parents tell them they must bring dates to the wedding to keep them out of trouble. Mike and Dave put out an ad for dates on Craigslist. The ad goes viral and the brothers go on The Wendy Williams Show to advertise themselves.

Meanwhile, Tatiana and Alice are slacker party girls who have just been fired for showing up to their waitressing jobs drunk. Tatiana sees the brothers' appearance on TV and decides that this free trip is just the vacation they need. They clean themselves up and Tatiana, to get their attention, throws herself in front of a moving car outside the bar where the brothers are meeting women. After letting the brothers think Mike saved Tatiana's life, they all go on a date. Tatiana, posing as a school teacher, flirts with Mike but has no intention of having sex with him. Alice, who is pretending to be a hedge fund manager, thinks sleeping with Dave is just what she needs to get over her ex-fiance, who left her at the altar. Thinking their family will like these girls, the brothers invite them to Hawaii.

In Hawaii, Tatiana and Alice charm the Stangle family but are almost exposed when Alice, suffering PTSD-like flashbacks of her own wedding, gets drunk and makes jealous, offhanded comments to Jeanie. At the same time Mike and his bisexual female cousin, Terry, begin competing for Tatiana's attention. The brothers book a swim-with-dolphins package for the family; however, the girls convince Jeanie and her fiance, Eric, to take an ATV tour through the mountains instead. Alice and Tatiana show off and perform tricks on their ATVs. Mike attempts the same trick but ends up crashing into Jeanie and severely bruising her face. Alice feels bad and bribes a masseuse to give Jeanie a massage with a "happy ending".

Tatiana goes into a sauna and runs into Terry. She offers Tatiana backstage passes to Rihanna if Tatiana fingers her. Dave finds himself falling for Alice and opens up to her about his dream of drawing full-time. Later Mike walks in on Jeanie having an orgasm during the massage. Upon finding Tatiana and Terry together, Mike storms off and Tatiana admits she was only interested in the free vacation. At the rehearsal dinner, Jeanie opens up to Alice about her fears about getting married. To help calm her nerves, Alice gives her ecstasy, which causes a bad trip. Mike drags Dave backstage and demands he practice their speech instead of spending more time with Alice. They get into an argument, and Mike reveals what happened in the massage parlor - unaware that they are being broadcast over the speaker system. The argument gets physical in front of the entire wedding party.
Jeanie and Alice take off their clothes and release a stable of horses. After yelling at Alice, Dave gets them both back to the resort, where Jeanie and Eric get into an argument and call off the wedding. The next day, the brothers make up and agree to work together to get the wedding back on track. At the same time, Tatiana and Alice feel guilty and also agree to fix the wedding. All four of them go to Jeanie and Eric's room to apologize, which ends in an argument. Eric silences all of them, and gives Jeanie an early honeymoon present: tickets for a hot air balloon ride. With the wedding back on, the four scramble to get a venue for the reception and food for dinner. Jeanie and Eric end up getting married outside the stables. After the wedding, Tatiana and Mike decide to get into business together. Alice deletes her wedding video before making out with Dave in front of everyone. The brothers perform a heartfelt duet to celebrate Jeanie's marriage. Alice and Tatiana then join them for a raunchy dance number. The fireworks display the brothers set off catches fire, scattering the wedding party. Tatiana and Mike later have sex in the stables. Download movie 4k ultra hd of the Mike and Dave Need Wedding Dates 2016
We now have