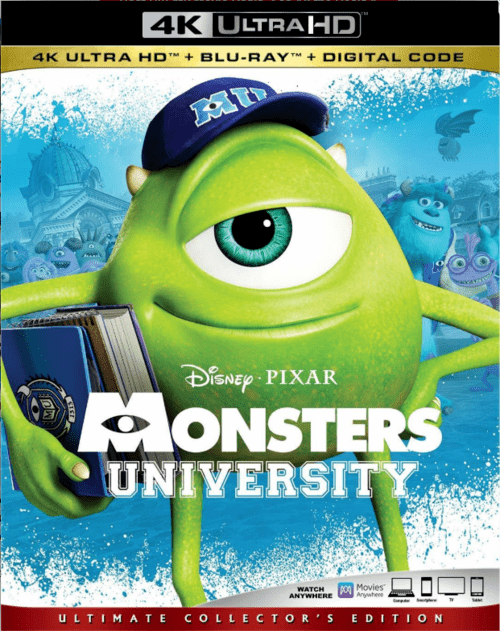 4k movies reviews
I went to the cinema with great pleasure, yet it is the "Corporation", such a kind and good cartoon. Well, of course, expecting something good. Not that this story will turn out better than the previous one, but still I wanted it to turn out kindly, interestingly and again to plunge into this small world of monsters. Honestly, I expected even less. This wonderful cartoon surprised me more than I wanted.

I love cartoons very much and I think that I will never stop. This one is on the list of my favorite cartoon pictures, and I am happy to review it. This time we have the background. I look lately it has become very popular to film what happened before. I don’t even know, on the one hand it’s interesting to look in chronological order, but on the other hand, you already saw the end of the story, and you don’t want to look in a different order. So just enjoy what we have. Mike and Sally, well-known scary friends, meet at Monster University. At first they disliked each other. Clever and assiduous Mike, and lazy but scary Sally. However, Mike’s dream from childhood to work in the Corporation does not allow him to become disgraced, he is obliged to finish his studies and get his dream job. He has such a chance. And in fact, this story turns out to be much more interesting than you expect.

This is wonderful graphics. I am, after all, a man of the 21st century, and to me, cartoons made entirely on a computer are much closer than drawn ones. They look more colorful, interesting, lively. And the whole atmosphere that reigns in the hall while watching is created thanks to this “modernity”. I love Mike Wazowski. He is such a hero who, I think, has been loved by everyone since childhood. After all, Mike is the embodiment of goodness and laughter. He is not able to scare (it became clear from the first part), but rather the opposite. Well, Sally is so big, kind, and it seems completely not an evil monster. With his high position as the main scarecrow, he does not seem evil at all, and after the first story this impression completely evaporates. So the duet of these two heroes creates just a pleasant atmosphere. This funny appearance and, of course, a grandiose voice acting. It’s good that they do not forget about cartoons - they sound just as brilliant. The voices of these two main characters are just something. And in the second part, we are faced with many new characters, each of which is not similar to each other, and for each such a successful voice is selected. Personally, I remember Scott and Don. This is a new duet of two cutest characters. So in terms of the picture, everything is fine here. Actually, another could not be expected.

The plot and script. Actually, honestly, I did not think at all that the plot would bypass my guesses. A different story was expected, very simple. It turned out to be interesting and very lively. I liked the idea with the competitions. I liked the "General Nightmare" (I will not reveal the secret - what it is), I liked the music and the script. This work was no worse. Again, everything is so connected, very interesting, and I am so grateful for the presence of my favorite jokes, because the humor in cartoons is always much brighter, kinder and just more pleasant. In general, the story turned out to be very good. Rich and completely not boring, because the picture lasts almost two hours. I was very afraid that it might turn out to be delayed, but no, rather the opposite.

Actually, I'm not sure this story is for children. Of course, for the children it’s a joy to watch the monsters that run, jump, swell. However, I like the cartoons to keep some kind of idea in themselves, an idea, to conceal something good. This is important for adults, and for children it’s already good. But it’s still wonderful that I can easily name enough cartoons that really make you think about something or even let a tear go (ideally). Monster Corporation is a very good example. This is such an incredible story that will amuse - and make you sad. The prequel was less touching, but still kept excellent. A few moments made me smile sincerely, sincerely, when you understand that you just watched the kindest picture, the story of something completely unknown and incredible, but so pleasant that you want to review it.

I don’t know (and I won’t guess) whether they would risk filming a third story about what happened after. "Monster University" - turned out to be an excellent background. It's nice to see these wonderful characters on the big screen. With brilliant graphics, script, plot, music and magical heroes. About real, strong friendship. With the very idea that I love so much.

And in the end - for all the good