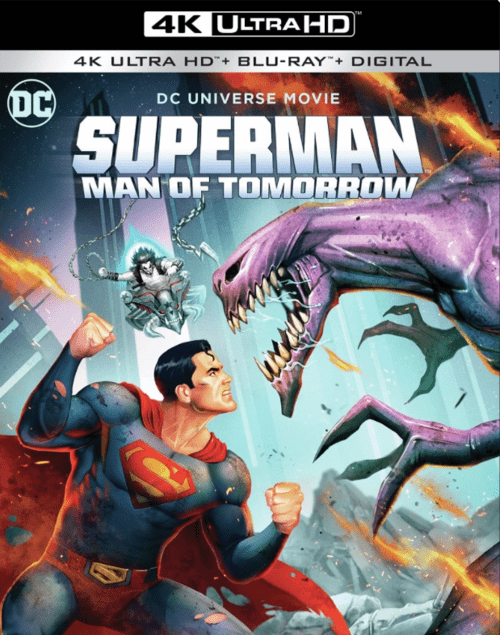 4k movies reviews
After the closure of the DC animated universe with the epic, large-scale, but brutal "Dark Justice League: War of the Apokolips," the bosses must have a question: where to go next? The fact is that at the end of the "War of Apokolips" the universe was quite rightly "rebooted". It seems like Superman: Man of Tomorrow is the first chapter in a new (which one?) DC animated universe. New origin story, new animated film, new ideas like Clark Kent, also known as Superman, trying to integrate into human society. One way or another, emotionality and epic are off the charts, despite melodramatic notes and a weak climax.

So, in this iteration, Clark Kent is just a trainee at the major newspaper Daily Planet. While he delivers coffee, his alter ego, instead of a red and blue tights, dresses up in a dark pilot's suit. Clarke uses his incredible abilities for good, although he is worried that people may misunderstand him or outright fear him. But then everything does not go quite the way we are used to: the launch of Lex Luther's rocket (voiced, by the way, by Zachary Quinto!) Went wrong; Lois Lane (with the voice of Alexandra Daddario) brings Lex to clean water and he is arrested. Superman learns a valuable lesson about the source of his power, and then meets the first dangerous enemies - space biker Lobo and Parasite, capable of absorbing any energy.

"Man of Tomorrow" omits the most boring and obvious plot motives. In general, Superman is a cult personality and it is interesting to look at the new story of his origin, which is slightly different from the generally known one, but still has its own nuances. Drawing an analogy with Batman, "Man of Tomorrow" is "Superman: Year One". Characters like Lex Luther and Lois Lane generally get their own storylines, revealing the heroes as part of the "restart" in a new form. The main antagonist turned out to be Parasite, whose legend of origin is depicted more effectively than in past animated works from DC.

Fortunately, the new image of Superman, while ignoring the tragic origins of the Kryptonian, works: he is an as-yet-inexperienced hero seeking his place in the world. Throughout the film, he only meets the iconic DC characters, comprehends his destiny and prepares to overcome many obstacles to become a Man of Steel. The main thing is, oddly enough, not the victory over the villains, but the fight against prejudices, the acceptance of a double identity and self-doubt.

Sometimes the writers do not shy away from serious emotional blows, balancing the tone of what is happening. Fun and hopeful moments are also present, which, again, makes this version of Superman much closer to the famous and canon image than Snyder. At the same time, it should be understood that "Man of Tomorrow" is the first record in a new universe, therefore the unanswered storylines hint at potential sequels and more and more new films from DC, in which, for sure, other characters will receive their own, unexpected interpretations ...

Featuring a new animation style with a bold and bold color palette, this Superman feels like a fresher version, especially when compared to the latest darker DCAU films. Of course, who is closer to who, but it is for a work about Superman that bright colors are the best choice; immediately pops up in the memory of the animated series of the late 90s. The action also did not disappoint: in “Man” there are many battles between heroes and villains, including an explosive third act. The design should also be noted.

It is quite possible to understand the curious, and sometimes perplexing, creative decisions of the group of creators: they were nevertheless instructed to "revive" the iconic character. They probably succeeded. A new beginning was laid for the biography of the main superhero and, in general, for the entire DC universe in an animated format. The start has its own perspectives: if they were able to find the right, creative approach to such, by all accounts, boring hero, then what will they do with more multifaceted characters like Batman?