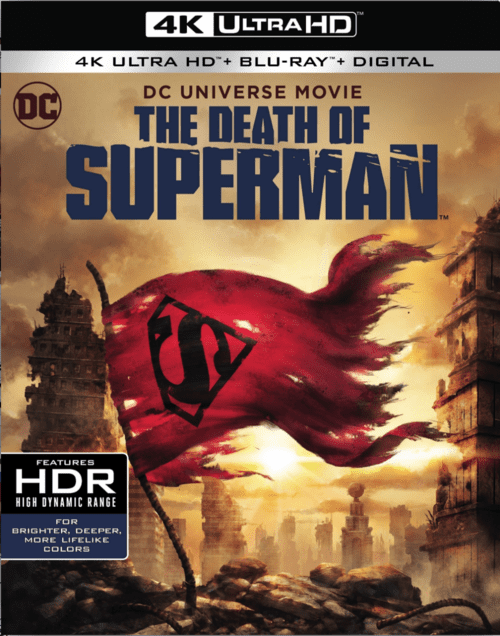 4k movie reviews
The next addition to the list of 4K films in 2018. The plot of the comic The death of Superman has, at its very essence, already quite a beaten plot. Yes, probably at the time of the release of this story, it was also a novelty, but not now, when almost every spectator who does not miss the big blockbusters managed to get acquainted with the conditional story in "Batman against Superman", then there is absolutely nothing to surprise. Yes, and if I remember correctly, the next novelty of Sam Lew is not the first animated screen version of this story. It certainly is not surprising, because Superman is invulnerable and dies not in every plot. Perhaps that's why the specified story and decided to once again adapt for television screens. Looking ahead, I will say that it turned out very worthy, at least much better than many of the latest DC adaptations.

In general, the main storyline I pointed out already above, and in itself the name of the film already speaks about a lot. Some additional comments here probably unnecessary, but the events of the picture originate from the League of Justice, which tirelessly struggles with various manifestations of crime and total aggression on the planet. Only here its participants did not expect that from the depths of the cosmos there will arrive a mysterious meteorite that contains within itself unbridled power, as well as total evil, capable of destroying all life on the planet, including the participants of the League of Justice itself.

That's probably what I like the most in such assembled hodgepodge with a whole bunch of superheroes, so this is the fact that the plot does not hit pretty mediocre and boring conversations, as well as events. So very often the last DC works about Batman and his son Damian sinned. That is, for the most part, nowhere and nothing is sagging, everything is clear and on the case. In the "Death of Superman", things are approximately the same and every event is, in principle, important for some narrative. And now the second half of the picture is entirely filled with a huge amount of zubodrobitelnogo action and I would even say that in places these battles look pretty epic.

If the story itself about the clash between Superman and Doomsday did not yet have time to fill you with nausea, then "Death of Superman" is simply obligatory for viewing, the plot tried to refresh it a little, namely add as many superheroes here as possible, dilute the first half with a good humor, well, non-stop The action makes us happy for probably thirty minutes of narrative narrative. The only weighty drawback was and probably still will still be a hackneyed story about which almost everyone knows and even likely people who are very little familiar with the DC universe. Hence, in fact, the final will be much less, though it is executed here very soundly and with due tragedy of what is happening.