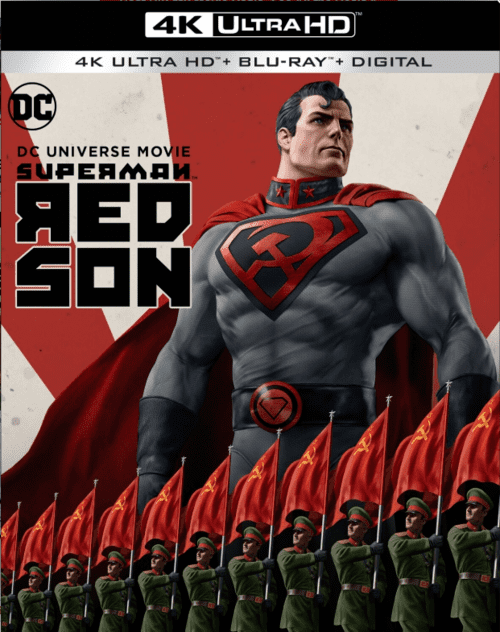 USA Movies / Animation 4K
Producer: Sam Liu
Cast:Jason Isaacs, Amy Acker, Diedrich Bader, Vanessa Marshall, Phil Morris, Paul Williams, Greg Chun, Phil LaMarr, Jim Meskimen, Sasha Roiz, William Salyers, Roger Craig Smith, Jason Spisak, Tara Strong, Anna Vocino.
IMDB 6.3
File Size 32.55 GB
Film description
Taken from IMDB.COM
In the post-war Soviet Union, the village boy wakes up with incredible abilities, which his girlfriend urges to use for the benefit of the Soviet people. A few years later, Superman is a symbol of the invincibility of the USSR and the trump card of Comrade Stalin in the arms race with the United States. One day, Superman rescues Metropolis from falling satellite and met a journalist Lois Lane, who opens his eyes to repression in the Union. Having learned the shocking truth about forced labor, Superman incinerates Stalin and himself leads the country. Meanwhile, the husband of Lois Lane, the millionaire Lex Luthor, creates his superhero based on DNA samples from the satellite.

Justice strategist, a guy from a communist paradise. Superman. Russian. He is opposed by the villain Lex Luther flavored with genetic material from space. They cannot help but meet. They cannot "not clash". And the rocks crumble from the falls, and the mountains crumble from fist swings. Give, give him a face! Well ... And Batman here is also counting on his portion of fame, as he wrapped his tentacles around Diana, the beauty and just Wonder Woman. But the Russian thug hurries to the rescue. And the battle of the titans cannot be avoided. And the final match is a foregone conclusion of the fight. And the Green Lantern? A whole guard sliding in the sky ...

Somewhat heavyweight cartoon even for a thirty year old, and not that of a thirteen year old child. It is tiring and sometimes dreary to digest endless passages on political topics. The slogans of ceremonial speeches that were once in vogue here sound endless stupidity from the lips of almost all the characters involved. It seems that we, the audience are not in 2020, but in the world of 40-50 years ago. Adults do not even remember this communist compote, and children from the stupid replicas will not be able to make anything useful. Are thrilling. Right in the hall asleep. Is there a documentary chronicle that the director has seen enough to tell us this story? If so, then with endless blah blah blah, he was clearly too clever. Add speed, - I want to exclaim. Color the episodes with adventure power with a detective component. Get away from straightforwardness and clumsiness, fire-fire, add fire !!! But no. They don’t hear. Alas. It's a pity.

The beginning of the heroic “Superman: Red Son” (2020) is a reflection of the dramatic and comedic “Forrest Gump” (1994) where the harmless and moronic tomboy “makes his legs” from a gang of local hooligans. Run away or not run away? Catch up or not catch up? And if they overtake, then will not the sides be wrinkled? And now the most beautiful and most charming girl screams shrilly - Run, Forrest! Forrest, run! Jenny's words with a charge of heptyl fuel in the ass. As if on wings, as if on a carpet-plane “gives you a kick”. And only everything calmed down, only the passions fell silent, the little boy confidentially informs his savior that it was not fear that moved them, not the shameful internal trembling that gave strength. On the contrary, extraordinary power, growing inside, made me escape from the trinity of idiots. It turns out the new Ilya of Muromets was born on Soviet soil. Yes, yes, it’s Soviet. For the author’s remark explains - 1946, the Soviet Union. But Ilyushenka will not dignify him. Everything is simpler here - Superman!

And then everything is like everything in the same Forrest Gump. Remember. Then do not be surprised.

So what do you think? If this is the new Russian Bogatyr, then his fate is not predetermined? Definitely. And the damsel Svetlana offers good fellow not to lurk, but to "open up before the authorities." That is, to serve the Fatherland, to stand up for the "princely inheritance". Here, in my opinion, one can see evidence of Sam Liu's knowledge of the historical Slavic epic. Almost a peasant son from the hinterland in the first roles to the helm of power comes forward. Has it been for centuries? Faced with a similar? As much as you want.

The nightingale of the robber, however, is not provided. Rati "Mongolian" will not have to harass. But this is not deep antiquity in the end, not the 13th-14th centuries with strangers in dominance. Other opponents, other adversaries here. Enemies are always unlimited.

And now the author lays one turn after another. If we build on 1946, then the events of the 50s go on - the war in Korea. And Soviet tanks led by Superman crush, crush, stomp, iron. Nonsense? Rave? No, to "infancy" the fed fairy tale. And then the 60s. In the USSR, the fight against terrorism (I didn’t understand where exactly, from which chronicle, the author “pulled” this passage? There is nothing like this in our history. There must be assistants made a forgery in haste). And in the USA - a secret base with a UFO demonstration (Roswell? Yeah). Seventies - in relative peace. And here is the beginning of a new decade - we are at war with them ... Either the director at school was not a brilliant student, or he forgot about the events after the end of World War II, but much of the light was filed “from the fifth to the tenth,” incoherence, inconsistency are obvious.

Funny mishmash of real and fictional weave of intricacies. What pleased us was the lack of a plain black wax in which Russia has been so diligently smearing Russia in recent years. Final chords for alternative thoughts about the difference of points of view. And accepting them in tolerance and tolerance by both sides.

Step by step, hell not a brother
The sun’s time, the moon’s clock,
Like a thaw in a snowfall
We walked the earth.
We were called black plague
They have honored us with evil spirits
As we walked along the front lines
Under the gaze of gaze.