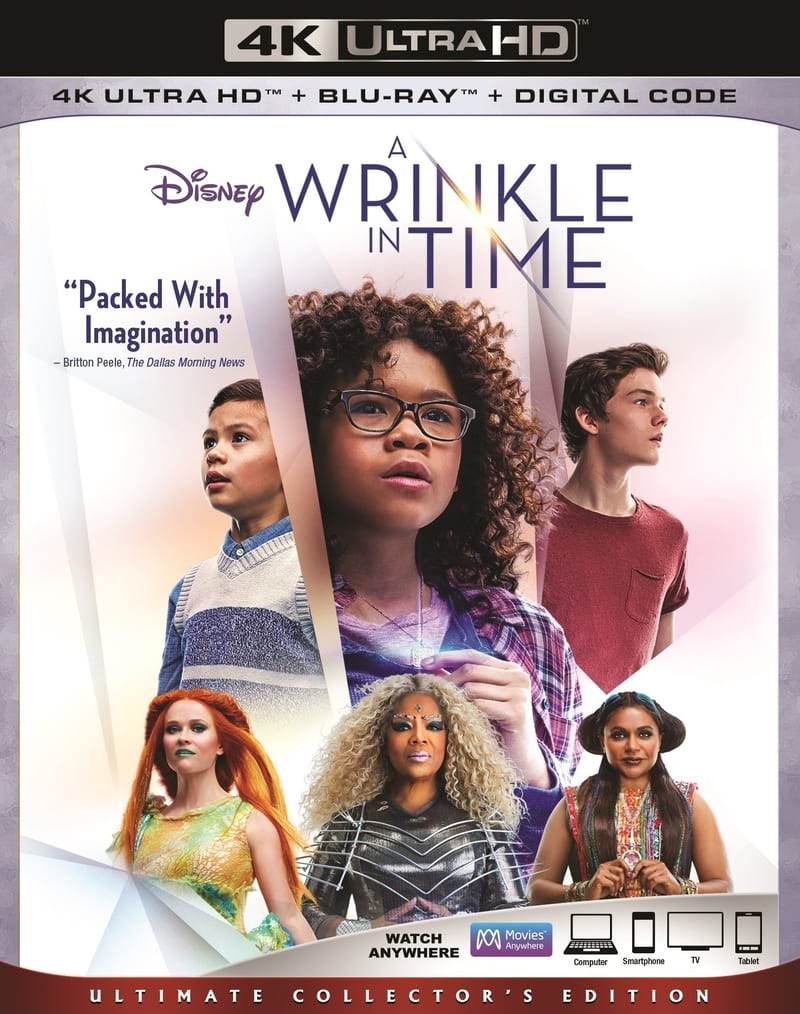 USA Movies / Adventure 4K
Producer: Ava DuVernay
Cast:Storm Reid, Oprah Winfrey, Reese Witherspoon, Mindy Kaling, Levi Miller, Deric McCabe, Chris Pine, Gugu Mbatha-Raw, Zach Galifianakis,,, Michael Pe?a, Andr? Holland Andr?, Rowan Blanchard, Bellamy Young, David Oyelowo, Conrad Roberts...
IMDB 4.2
File Size 52.20 GB
Film description
Taken from IMDB.COM
Realese 2018 film of A Wrinkle in Time in 4K UHD. Young Meg together with his younger brother and school buddy decides to go in search of his father, a scientist-physicist, who disappeared during the scientific experiment. Find it is not in the familiar world, but in the mysterious twists of time and space, where the concept of reality is relatively and nothing can be trusted! Get out of the fantastic worlds and defeat the darkness that spreads through the universe, you can only by studying yourself and accepting your shortcomings.

4K movie reviews
The film "A Wrinkle in Time Ultra HD" is a spring tale from the Disney studio for schoolchildren, it's not easy for schoolchildren, and those who already go to the grocery store for themselves, who walk on the street without the supervision of adult relatives. For the student will be a good time, if he starts his "adult" paying life in a modern consumer paradise with the purchase of a ticket for this film. Disney's studio has set an age limit of 6+. But this film is probably not for family viewing, but for school campaigns of teenagers of 13-15 years.

If you say with a sense of humor about this film, then "A Wrinkle in Time 4K 2160p" is a popular science spring fairy tale. Disney softly plays high mathematics and physics, adding philosophical problems to adolescents. In Western countries there is an acute problem of "full" families: where there is a mother, father and beloved children. Loving daughter Meg is looking for her beloved father in the universe. The global scientific world pierces love. Oh my God! How does this eternal theme of "love" politically correct in this spring tale.

Themes of teenagers: to be fashionable, to be beloved parents, to be smart, to be the best in the world - this is so important in a consumption society where social networks start to rule. A heaped smartphone with a bunch of friends in the form of avatars or the love of parents? Disney gives the answer to this question: of course love! It is eternal, while a person is alive. Shkolnik worries about how many chips or Coca-Cola he can buy for pocket money, but with age he will understand: the love of parents turns into love for their children.

1 step to accept your shortcomings = 2 step to love yourself, what you are = 3 step loving yourself, love your neighbor - is that Disney has screened the Bible with modern images and words? Answer the audience: is it about Divine love or love, as a politically correct escape from fears of difficult scientific formulas?