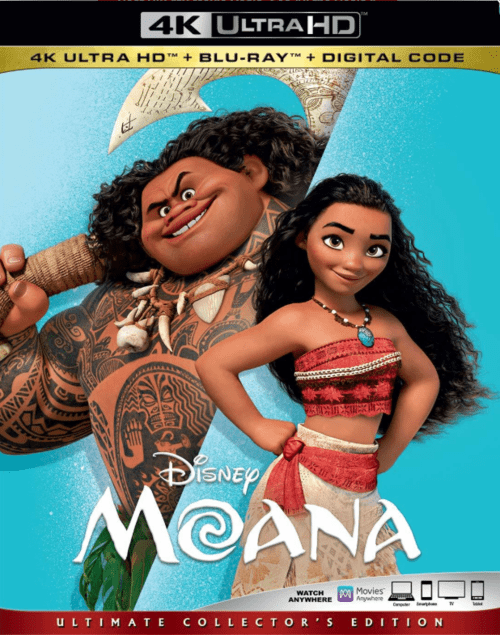 USA Movies / Animation 4K
Producer: Ron Clements, John Musker
Cast:Auli'i Cravalho, Dwayne Johnson, Rachel House, Temuera Morrison, Jemaine Clement, Nicole Scherzinger, Alan Tudyk, Oscar Kightley, Troy Polamalu, Puanani Cravalho, Louise Bush.
IMDB 7.6
File Size 55.05 GB
Film description
Taken from IMDB.COM
The fearless Moana, the daughter of the leader of a small tribe on an island in the Pacific Ocean, dreams of adventure more than anything else and decides to embark on a dangerous sea voyage. Together with the once powerful demigod Maui, they have to cross the ocean, fight with terrible monsters and destroy the ancient spell.

4k movies reviews
Moana, the daughter of the leader of a small island tribe, from early childhood experienced a strange attraction to the ocean, despite the fact that the strongest dogma of her people was a travel ban. Moana almost came to terms with her fate and the will of her father, but soon she became aware that due to the stupid act of the demigod Maui, darkness was slowly but surely coming to the whole world. Soon her tribe will have nothing to eat and nowhere to live, and only a decisive sea voyage can help to avoid disaster.

There are several pillars of Hollywood in American cinema that you always know what to expect from: Stephen Spielberg, Robert Zemeckis, perhaps Michael Bay, and, of course, Walt Disney's studio. Her cartoons, with extremely rare exceptions, are built on the same, many years ago, established pattern, which, on the one hand, causes the viewer a pleasant sense of recognition, and on the other, guarantees a high quality picture. Of course, individual details change, entertaining chips come up, funny characters are drawn, but the basis is always the same: a melodramatic plot with a relatively childish morality, a beautiful, high-quality rendering, a strong-willed main character (the so-called Disney Princess), several idiotic characters called cause laughter in a small and not very spectator, and, of course, songs.

So “Moana” is a classic “Disney Disneyevich”, which does not recede a step from its general line. However, nothing is bad about this, by and large. A masterpiece from such cartoons will never work out, it’s true, but a picture for one or two views that does not cause a negative and leaves a pleasant aftertaste is a complete welcome. Most of all I liked, of course, the demigod Maui - a bright, ambiguous character, endowed with a rather controversial character and a lively tattoo on the body. In many ways, it was he who assumed the function of humor, since I honestly am not happy with the crazy cock of Heikhey: he was too stupid. Moana herself is again a typical Disney princess, the half-film is rapidly spinning, the half-film is suffering frantically due to a lack of self-identification. I really liked the final twist of the cartoon - this is what I really did not expect from Disney, it turned out thoughtfully, unexpectedly, and even with a little philosophical overtones.

In short, as you already understood, "Moana" is a bright representative of template animation from Disney Studio. Your impression will depend on how you tune in to this very stereotyped. If your inner child is able to accept the rules of the game and just enjoy the animation and classic characters, then you will like it. If you will be annoying about the reusable pattern, then you should not look, definitely.3