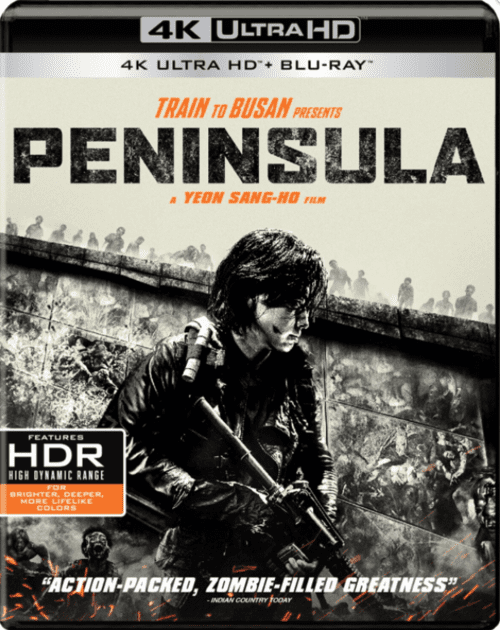 South Korea Thrillers 4K / Horror 4K
Producer: Sang-ho Yeon
Cast:Dong-Won Gang, Jung-hyun Lee, Re Lee, Hae-hyo Kwon, Min-Jae Kim, Gyo-hwan Koo, Do-Yoon Kim, Ye-Won Lee, Daniel Joey Albright, Si-Won Cha, Pierce Conran, Geoffrey Giuliano, Christopher Gordon, Yeon-hee Hwang, So-yeon Jang.
IMDB 5.4
File Size 53.90 GB
Film description
Taken from IMDB.COM
Four years after the outbreak of a terrible virus, the spread of which South Korea could not contain, what remains of the country is under blockade, and hordes of zombies are roaming the peninsula. Former military man Han Jong-sok, who at one time managed to evacuate, as part of a small detachment leaves Hong Kong to a closed area to find a truck with money. He will have to make his way through an eerie world, where, in addition to the aforementioned threat, people who arrange cruel survival games are also dangerous.

4k movies reviews
The events of the second part of the film unfolded after 4 years. Severe gangsters throw a group of ragged mercenaries with nothing to lose into a zombie-infested city on the peninsula to return a truck abandoned with money. Through the crowds of rotten bodies and hostile "local" survivors, the main characters have a difficult path to salvation full of dangers and adventures ...

Unlike the first part, where all the action was tied to the train, in the second the filmmakers went further and expanded the universe. Now the viewer is immersed in a city numb from dead silence, where zombies rule during the day, and groups of survivors are selected on the streets at night. The picture changes direction a little, leaning more towards a driving horror action movie with a huge amount of action.

The plot is straightforward and reminded of Carpenter's cult tape "Escape from New York", and this parallel is obvious: a peninsula cut off from the outside world where mercenaries are forcibly thrown to complete a mission, surviving people who have abandoned hope of salvation by organizing their groups, the cold atmosphere of the post-apocalypse.

If we consider the tape in terms of a dynamic attraction with a zombie, then it fulfills its function to entertain and keep it at the screen, two hours of timing fly by unnoticed. I would like to scold for the unpretentious graphics, which in some scenes look frankly cartoonish, and it becomes a little offensive that the masters from Hollywood did not work here - it would look many times more spectacular.

Moral: in the case of a zombie apocalypse - jump on the rotting first, bite and run, while the corpse wonders what it was now.

As a result, the film is a zombie action game with shootings and chases in the post-apocalyptic setting.