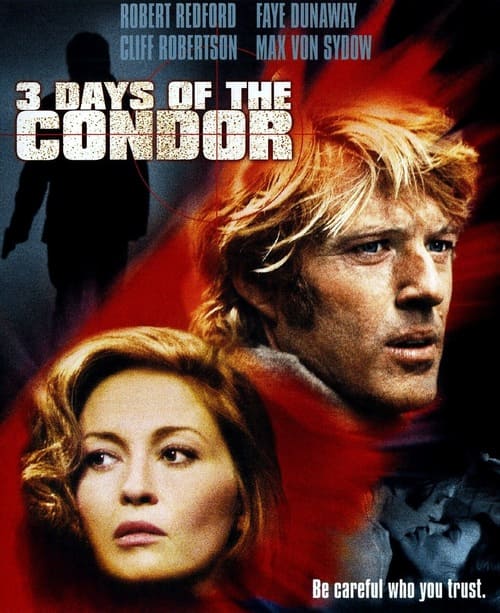 On the last working day before Christmas, Turner, returning after lunch break, is horrified to find the corpses of his 6 colleagues in the office. He makes an "emergency" phone call to the CIA on duty. The authorities make an appointment with him. But it turns out to be a trap. Turner has only one thing to do: at his own peril and risk, find out the reasons for the hunt arranged for him.

4k movies reviews
At one time, when I first watched the wonderful film A Beautiful Mind, I was very interested in watching the work that the hero of Russell Crowe performed for the office, which was represented by the character of Ed Harris. It would seem that what a serious organization like the CIA or the NSA would be entrusted with such nonsense as looking for potential enemy working techniques in fiction or scientific literature. In Ron Howard's film, this turned out to be John Nash's painful hallucinations.

However, as it turned out, back in the mid-1970s in Hollywood, this plot move was played up as a very real situation. Robert Redford's hero Joe Turner is one of the many (according to the film) representatives of this particular bookworm work under the wing of the CIA. The film begins with a demonstration of the work of one of the sections of this CIA department. Already in the first frames, one can discern an approximate description of the main character, Condor (Turner's operational pseudonym), who, despite numerous delays to work, is a professional in his field. However, one day in November, this professionalism played a cruel joke on him: when Turner was absent from the workplace, a group of people in camouflage and with weapons entered the office, led by a seasoned assassin Gibert (Max von Sydow after playing chess with Death and exorcism of the devil retrained into a character who himself arranges for people to meet death, if he is paid) and methodically shot all the people who were in the building. A little later, it turned out that the culprit of these events was Condor, who sent an interesting report to Washington, found in some book materials, and incited serious people in high positions of the CIA against himself. In general, the guy got to the full program. This is followed by an unequal struggle of a simple loner with a powerful structure, in which some are clear traitors, while others consider Turner a double agent and organizer of the execution of his colleagues in the office. And only the instinct of self-preservation, excellent analytical skills, without which he would not have been taken as a bookworm, and the army experience of working as a signalman (about this fact in his biography, the CIA-Schnick Higgins reports to his superiors) can save Condor only the instinct of self-preservation, excellent analytical skills, will also come in handy.

For the spy thriller genre, the film is definitely iconic, because:
1) Filmed during the heyday of this direction, when after Watergate criticism of the special services and other power structures was extremely popular;
2) References to 'Condor' can be found in many modern spy hits like 'Enemy of the State' or 'The Bourne Identity'.

Sydney Pollack did a great job. Despite the lack of action, the movie is a breeze to watch, in any case I did not notice a single sagging or dragging out from the first to the last frame. I am writing this without being clouded by nostalgia for the classics, since I first saw this film only six months ago. And I think that modern 'Bourne' and 'Mission Impossible' are just childish babble in comparison with 'Three Days', although this, of course, is the subjective view of a genre lover and it is quite fair if this tape seems boring to someone.

However, an interesting production, which includes a peculiar, as boris_05 noted, the atmosphere of late November autumn, several extremely tense scenes, such as, for example, the merciless shooting of the workers of the area by a group of liquidators led by liquidator Gibert, and Turner's fight with the 'postman' at Catty's apartment, or a joint ride in the Condor and Gibert elevator, not to mention the final shot. Camera work at height. Of particular interest is the music of Dave Grusin, which, it would seem, should not at all fit into the gloomy atmosphere of the film (I'm used to hearing in such a movie something in the style of Bernard Hermann, the constant composer of Hitchcock, or modern representatives of the genre like 'Ronin' and 'Spy Games' ), but in fact fit organically into the plot and added brightness to Pollack's film.

Well, the main plot component is also impressive. You can scold American cinema as much as you want, but the fact that they, unlike domestic filmmakers, are able to critically look at their own system is worthy of respect. Here the creators rode through such a serious organization as the CIA, but I really don't want to.
That is just a telephone conversation of the Condor with the imperturbable attendant:
Condor: The site has been attacked.
Duty: What level?
Condor: Level of what?
Attendant: Damage.
Condor: Everyone died ...
Attendant: Are you on a secure line?
Condor: No, I'm calling from a pay phone. From the street.
Duty: Violating negotiation security protocol, Condor.
Condor: Listen, you freak, I came back and brought dinner, and everyone is dead.

However, the higher ranks of the CIA are also good in this film. What is Higgins, who at the first meeting with the words 'I'm sorry' makes it clear to Turner that he will have to 'bring fire on himself'. And in the finale, he generally burst out with such a justifying monologue about the public interests that the office protects, that you can immediately see what importance these guys attach to a simple individual. As Turner said, 'Ours ... You guys are just like a country within a country. Our ... '

However, the creators do not show them completely as complete goats, demonstrating specifically Higgins or his boss Wabash only as cogs in a complex state mechanism, forced to go to extreme measures, not out of their own pleasure, but from the fact that their work itself is dirty. You can recall their dialogue:
Higgins: Sir, do you miss the days when you first started serving?
Wobash: No. I miss the clarity with which I saw the situation back then.

The cast did their job well.

Robert Redford brilliantly revealed the character of Joe Turner, cornered but not giving up. No snot in the spirit of Colin Farrell from 'The Recruit', no excessive coolness in the spirit of Bourne performed by Matt Damon or Tom Cruise in Missions, nevertheless, the inner tension of the hero is convincingly conveyed and at the same time the determination to go all the way, challenging powerful representatives organizations. As Gibert said about him: 'The Condor is an amateur. He is confused, unpredictable, maybe even sentimental. It can mislead a professional. At the same time, not on purpose, but precisely because of their confusion. ' To these characteristics can be added a strong character and good tactical thinking, as a result of which the protagonist was able to offer serious resistance to dangerous and influential people. In a similar genre, there were other strong images of life characters who fell into similar serious bindings. You can recall Dustin Hoffman in The Marathon, Gene Hackman in The Domino Principle, Alain Delon in The Three Must Be Eliminated, Jeff Bridges in The Road to Arlington, but, in my opinion, no one could surpass Redford in this type of hero (from those I have seen).

Faye Dunway also performed excellently in the role of Catty, the girl with whom Turner accidentally crossed paths. The transition from the initial feeling of confusion to the desire to help Condor is played convincingly.

Cliff Robertson is also very good in the role of the imperturbable CIA guy Higgins, who looks like a normal guy, but when you see him at work, this character immediately evokes unpleasant emotions.

Well, Max Von Sydow is just a handsome man! A cold-blooded killer with glasses, he is super colorful. Real evil in the flesh. Something positive manifests itself in him only at the end in the house of the culprit of all the troubles Turner. However, the act of supplying the protagonist with a barrel in an emergency does not at all justify Gibert, since after a while he can kill the Condor without batting an eye if the office pays him. This is evidenced by his excellent phrase about what questions he asks when receiving an order.

In general, 'Three Days of the Condor' is a real standard of a spy thriller with an excellent plot, impressive direction, brilliant actors and a delicately made open ending, when each viewer is free to think out the future of the protagonist.