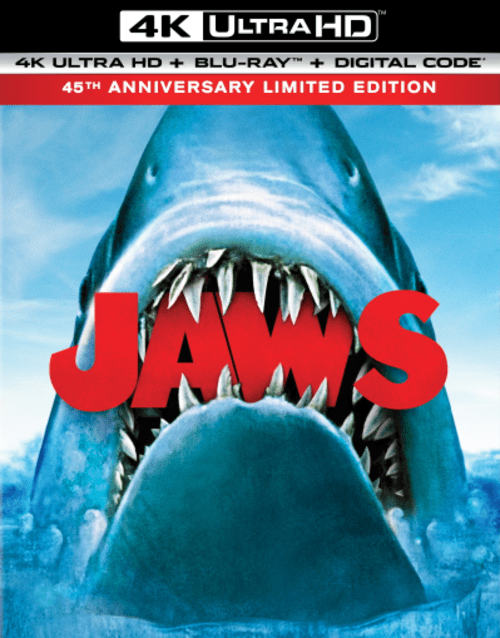 Every day the number of victims of a bloodthirsty shark continues to increase. Can a brave shark hunter, a veteran of World War II, a fisherman Quint on his ship, catch and kill a cannibal shark? Martin Brody and Matt Hooper, an expert from the National Oceanography Institute, who arrived on the island, set off on a dangerous sea expedition with him.

4k movies reviews
Jaws is an undeniably cult film from cult director Steven Spielberg. To think only 36 years have passed since the release of this, without exaggeration, a great picture, now Stephen knows almost any movie fan, for me this is the best director in the world, but in those days, Stephen did not find such popularity as he has now.

Jaw, in my opinion, is his first masterpiece, of course, many may disagree, because now you won’t be surprised with such films, now films are made with huge budgets and with a lot of action and special effects, but I personally think that Stephen made the best movie about sharks, about the bloodthirsty cannibal monster who arranged a hunt for people. I decided to revisit the favorite movie of many moviegoers again and you know a lot of emotions even now, of course it’s not scary, but in places it’s scary, especially in the end it’s been seen dozens of times, but it’s quite scary to watch the Shark devour a person. I love this film for its simplicity, everything was done very high quality and tastefully, excellent music, I would call it very mysterious and awesome, and of course the game of the actors is very impressive, everyone who played special respect deserves me, even the victims really impressed me, they don’t seem to have much time, but they very realistically fulfill those small minutes that they have, if now everything looks very played up and corny, then more than 30 years ago everything looks pretty realistic, the feeling that I’m watching newsreels doesn’t leave me vital and realistic.

I would like to pay special attention to the shark because of which this whole amazing story begins, if you watch current films about sharks, then only one negative comes to mind, those sharks that now show us only a huge portion of laughter and look like a doll in the Jaws But the Shark is very smart, it dulled a little bit only at the end, and then this controversial point of view, you look at the Shark and even at the very sight of it becomes a little creepy, imagine that if you ever meet this "miracle" and it becomes uneasy, but I can imagine what emotions moviegoers had when this film was just released. This is, without exaggeration, a great film. Stephen is a great master, a great director and a wonderful person sure, I think such films will be reviewed and revised, he made candy from the budget of 7 million dollars, although it must be admitted that the budget is quite a bit too big up to that time.

I would like to note especially Roy Scheider, Robert Shaw and of course Richard Dreyfuss, each character was amazing in his own way, the Sheriff did not give up and walked to the end and showed the initiative to save the inhabitants from the bloodthirsty monster, Richard's hero was obsessed with Sharks and it was a duty to him to repulse the bloodthirsty monster, well, the hero of Roy, of course, lived only by killing the Sharks and joking and humming a lot.

I consider this movie without flaws.

Cinema for all time.