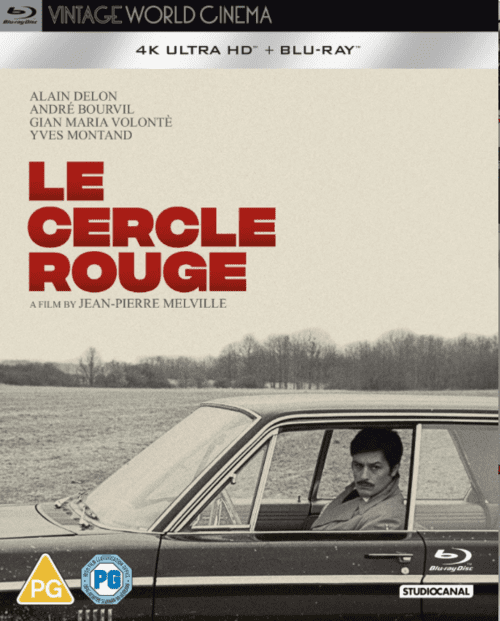 Two criminals, two lone wolves become loyal friends. They can do a lot, but not all. A sniper is needed to implement the plan. This is how Jensen, a former police officer, finds himself in the "red circle".

Theft of 2 billion francs worth of jewelry by the "old" is a huge success. But how long will she accompany the heroes if the cunning commissar Matei is following their trail ...

4k movies reviews
The Red Circle is a unique piece of art in French cinema. There are several prerequisites for this. The director of this film, Jean-Pierre Melville, shot films of a special, distinctive genre. His films are meditative, laconic and at the same time imbued with some special drama, each frame in Melville's films is a whole picture and at the same time without a single false note. Everything seems to be drawn from life, which is very strangely mounted with original epigraphs to his films. The epigraph to "The Circle" is an aphorism attributed to Buddha, and is very suitable for the picture itself, which is also unusually long for European cinema.

But in addition, the "Red Circle" itself is marked by the presence of actors in it, who by 1970 were already known in different roles. These are Alain Delon, Andr? Bourville, Gian-Maria Volonte, Yves Montand and, in a semi-episodic role, Fran?ois Perier, perhaps the only supporting actor who will be remembered by the viewer for a long time. Five stars converging in the film for two and a quarter hours of screen time. Moreover, the role of each of them is unique and independent in its own way. The idea of confrontation, which is also quite traditional for the French, also finds a new, unusual embodiment in two lines. This is, firstly, the central one - the confrontation between the trinity of robbers and the cunning commissar, and a little outside, but directly related to the development of events - the collision of the same commissar with a person whom he simply presses for his career advancement. And each of these five people brilliantly played the role assigned to him in this film. Without a single false note, and not a single extra word or gesture.

The hero of Gian Maria Volonte, the bandit Vogel, makes a daring escape during the trip. Commissioner Matei, the hero of Andr? Burville, reacts instantly and professionally - he announces a raid. And, contemplating the scene on the screen - the movement of police officers with dogs - you involuntarily begin to sympathize with the criminal. Indeed, in the film there is not a word about what Vogel did, and this is not the main thing. An involuntary horror is caused by the fact that a whole army was sent to a lonely and unarmed person - solely in order to "curry favor". It’s just right to quote Vysotsky: “The tears drowned out the beating of hearts, mine was beating loudly for me ...” Not literally, of course, but Vogel's heartbeat is felt in the scene where he runs from the chase, turning back at every step. And the fact that Vogel, who perfectly understands how his escape can end for him, nevertheless accomplishes it - brings into his image life-like traits such as love of freedom and love of life.

The hero of Alain Delon, the noble thief Kore, in a gangster style, is also of interest. Vogel climbs into the trunk of his car to escape the raid. The rest (later, Vogel will help Kore) - is a kind of criminal "baptism", an unusual ritual, which becomes a preamble to their friendship.

But if my purely audience sympathy went to the Delon - Volonte tandem, then, as specific characters, the heroes of Montana, Burville and Perrier turned out to be much stronger and brighter. Old school.
The hero of Yves Montana, the shooter Jansen, first appears in the frame in a deeply drunk state, and at the same time still suffers from the most severe delirium tremens. After some time, we already see Jansen in a completely different form - a training shooter. And the scene where he casts bullets for the upcoming robbery? You can't drink professionalism! And afterwards Jansen will say to Kore: “I don’t need a share of what I received. You've already paid me to get rid of the creatures that lived in my closet. "

The hero of Andr? Burville is a cunning, not very moral careerist, ready to go to any lengths for promotion. In his laconic remarks, his essence is reflected as accurately as possible - a servant of law, who does not really think about human feelings. It is characterized by an attitude towards a person as a material, but not as a living being ...

And finally, the hero of Fran?ois Perrier named Santi. The man is not particularly law-abiding, who once knew Vogel. But, I really want to emphasize - not particularly law-abiding, nothing more! Actually, he did nothing terrible. Well, I once drove an acquaintance with a bandit, well, it contains a bar of dubious purpose and is seen in pimping - nevertheless, there is nothing terrible in this. The fifty-year-old hero Perrier has a 16-year-old son. And it is quite understandable that a father loves his child with tender love, which, in general, is inherent in all elderly parents.

However, as a result of pandering, Santi is “on the pencil” by Matei, who is trying to make an informant out of Perrier's character. And the cunning hero Burville uses all available means to knock information about Vogel out of him. Closer to the finale, he goes to a thing that will cause shudder in any person, commits a cruel, unprecedented provocation. Even such a professional as Matei can make a mistake, which goes sideways for absolutely everyone - for Santi and for the commissioner himself. Provocative detention leads to the disclosure of the truth. Then something terrible happens ... At this point I wondered: is it possible that Burville's hero will still sleep peacefully after this and, most importantly, how will he now look people in the eyes? Everything turned out to be simple, nothing stops the policeman from wanting to catch Vogel. It is in this scene that the inhuman essence of the careerist Matei and Santi's acute inner pain are very clearly manifested, which is so strongly felt by the viewer that the unfortunate father does not know the truth and hopes that everything will go well. The intellectual Melville put everything in its place. Criminals turn out to be good people. The servant of law is simply a disgusting human type. Santi is infinite pity.

The ending of the film is sad, but logical. In it I really liked Jansen's capacious, short phrase: "Is that you? ... So, the same idiots still work in the police."

The Red Circle is a masterpiece that, in my opinion, is a must see for anyone who loves old French crime movies. It is a leisurely, laconic film filled with drama and remains relevant at all times. He was noted for the outstanding author's talent of Melville, the wonderful original play of Delon, Volonte, Montana, Bourville and Perrier. And if it's simple - look! I assure you will love it.