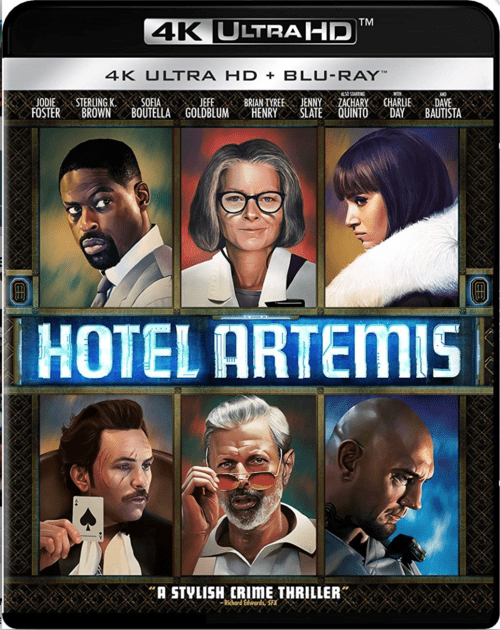 4k movie reviews
In the center of dusty and smokey Los Angeles, there is a refuge hotel ready to provide its guests with a room, medical care (of various kinds), protection and good drinks. All this, of course, is available only to a limited circle of people, by subscription for a lump sum. The hotel operates around the clock, without breaks and weekends for 22 years, until one day a couple of robbers visit it, mistakenly robbing the head of the criminal world of Los Angeles.

"Hotel Artemis 4K" is the first independent work of a young director Drew Pierce. Shot before that only clips, as well as participating in the writing of the script for the triquel of Iron Man. In many ways, the film repeats the concept of the Continental Hotel from another, more famous film. The only difference is that the picture takes place in the near future. Printers have already printed donor organs and firearms, portable laser scalpels are used in medicine, and wounds are treated with nano-bots by injection into the bloodstream. At the same time, most people are forced to fight for existence - evil corporations have fully monopolized the water market. In short, the expression “high-tec low-life”, popular in cyberpunk, fits perfectly.

In the center of the plot unfolds several stories. The owner of the hotel and concurrently Nurse Jeanne performed by J. Foster. She drinks a lot and, like all doctors, does not take good care of her own health. But at the same time, has an ideal reputation, and the hotel under her leadership has existed for over 20 years. For her, to harbor and patch the wounded criminals from the entire city has long been turned into a routine, and yet she still continues her work. She is actively helped by the brother of the bouncer Everest (Dave Batista) - a person who is easily ready not only to stitch up wounds but also to break bones, if one of the guests begins to violate the rules of the hotel. After the unsuccessful robbery, another one of the film’s heroes arrives at the hotel. A professional bank robber - Waikiki (Sterling Brown), along with a wounded drug addict. It so happened that in the process of the robbery, the brother pulled off the container handle belonging to the boss of the criminal world, King Wolf. Which already goes after them, to the hotel. In addition, the hotel is still an arrogant arms dealer and a charming French killer, played by Sofia Boutella. For which, it seems, has already entrenched the role of all the negative female characters in all films. The purpose of the character Sofia, to kill the leader of the mafia - the very King Wolf, who plays forever young Jeff Goldblum. The appearance in the frame of which literally gives a second breath to the film, closer to the denouement.

In general, the film is worthy to watch it in the cinema, at least because of the cast. In addition, in the 4K film there is a pretty good set action and a pair of recognizable melodies from the 1970s. Definitely for sure, I have a complaint about the structure of the script and the logic of behavior of some characters, but you can easily close your eyes to this all if you take the film as a summer fighter who will brighten up the time before the release of film premieres of the coming autumn. In the "Hotel" is not something outstanding, but it has its own, unique style and a whole echelon of recognizable actors. The picture is worthy of going to the movies. In any case, this is the best of what summer hire in the genre of action fiction can offer you.