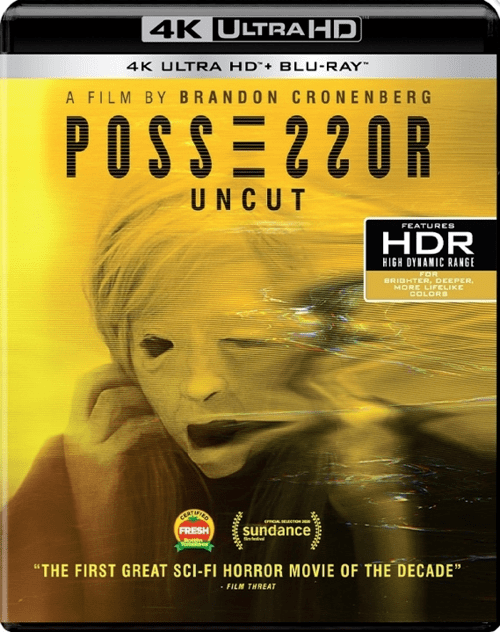 Canada | UK Thrillers 4K / Horror 4K
Producer: Brandon Cronenberg
Cast:Gabrielle Graham, Hanneke Talbot, Matthew Garlick, Daniel Park, Andrea Riseborough, Jennifer Jason Leigh, Hrant Alianak, Rachael Crawford, Rossif Sutherland, Gage Graham-Arbuthnot, Kathy Maloney, Megan Vincent, Danny Waugh, Christopher Abbott, Tuppence Middleton.
IMDB 6.4
File Size 50.35 GB
Film description
Taken from IMDB.COM
In the future, with the help of some brain implants, the killer may end up in the body of another person and, suppressing his will, commit murders. But it is possible to leave the host's body only if he dies. A sinister corporation is behind this, and one day the performer of such terrible tasks begins to lose control.

4k movies reviews
'In Another's Skin' (Owner) - the author's fantastic-dramatic thriller will primarily appeal to those who love a special aesthetics in the frame and an unusual approach in the visual and technical direction, as director Brandon Cronenberg, son of the famous David Cronenberg ('Fly') , did a cross between old school body horror and a modern fantasy thriller with all the potential references to cool action. The film uses a concept that is best suited just for a large-scale spectacular movie, where, according to the plot, killers get into the heads of innocent victims and commit contract killings. It would seem that such a concept would not take root in the genre of horror thriller, but the director managed to transform such an idea into a certain author's product with an emphasis on arthouse. Lingering plans with deep drama of this or that hero await you. In the film, there are few actions as such and dialogues, but this gives the director an excellent opportunity for a more thorough study of the frightening atmosphere, thanks to which the viewer finds himself as if in a sucking, viscous swamp, from which it is impossible to get out without help. It is usually said about such films, where violence is shown with special passion, that they are not recommended for people with a weak mentality and prone to aggression. That is why this picture belongs to the horror genre, instead of the usual thriller, since the director does not hesitate to close-up to reveal the all-consuming horror of human cruelty, affecting almost all the characters.

But at the same time, for sure, the absolute majority of the audience will not be delighted with the author's solution to the plot denouement with the abrupt ending, where the director literally cut off the last five to ten minutes and started the credits.

In general, if you are interested in such experiments and like killer naturalism, then get ready to get a truly aesthetic pleasure from viewing, and everyone else is better off reading this publication.