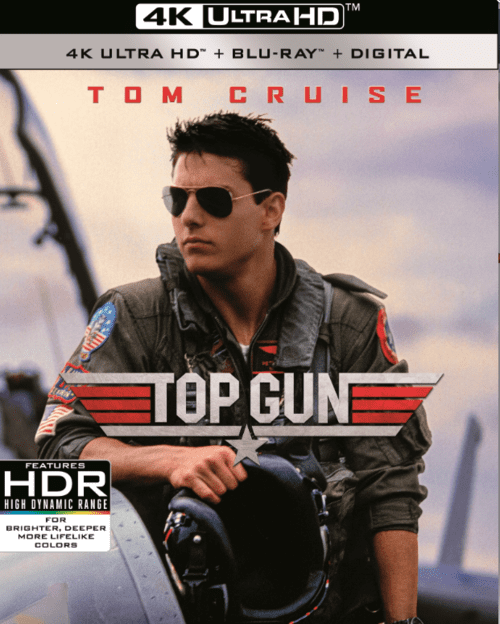 USA Movies / Drama 4K
Producer: Tony Scott
Cast:Tom Cruise, Kelly McGillis, Val Kilmer, Anthony Edwards, Tom Skerritt, Michael Ironside, John Stockwell, Barry Tubb, Rick Rossovich, Tim Robbins, Clarence Gilyard Jr., Whip Hubley, James Tolkan, Meg Ryan, Adrian Pasdar.
IMDB 6.9
File Size 57.97 GB
Film description
Taken from IMDB.COM
A skilled pilot of the F-14 fighter, a cadet of the elite school of the U.S. Navy, flying as a god and guided both in life and in the sky by instincts, not reason, falls in love with the school instructor, an astrophysicist who for a long time denies him reciprocity. Will she give in to his white-toothed smile?

4k movies reviews
Immediately after watching, I had a painful, complex, gnawing question: why didn’t I see this before?

Holy planes, yes, my parents review Top Gun (and I refuse to call it differently) several times a year. Well, what always prevented me from sitting next to them with a TV and not losing my childhood? Namely, a movie of such a plan I watched all my early years. It was a universal soldier, and AWOL, and Die Hard, and many pictures about submarines.

In order not to delay or create a journalistic atmosphere for a long time, I will say right away: I am in absolute, irrevocable, reckless delight. Partly because this whole spirit is terribly close to me, and I mostly prefer the music of those times. Part of the fact that, in my opinion, this film became the founder of what we now call stereotypes.

I will explain: Maverick (and this is our delightfully young and extravagant Tom Cruise) is so bastard, a genius in the sky, a daredevil, naughty and explosive. He flies like a devil, yielding to no one and sometimes making mistakes because of this. Excellent, fresh, very original personality - for the eighty-sixth year. Of course, I won’t give a tooth that it was he who served as the prototype for the stamped movie heroes, but I’m sure that then he shot, just like a rocket, from ... well, from what it is attached to there. I’m not going to google to show off the knowledge of the F-14 device.

Further - of course, he will fall in love with the most inappropriate girl, which, by the way, I did not like. Charlie (this is Kelly McGillis) for some reason seemed to me a bad person. Ah, probably because the young Tom Cruise got into it. Lord, she is his instructor! How will they be together? And so, everything is perfectly shown there. Honestly, the scene for the Berlin song came out very beautiful.

And then it turns out that Pete is behaving like a Tasmanian devil because his dad died in the sky, his elements let him down, almost betrayed him, and the boy is tormented by the question of whether he was to blame. After all, the personality of his character is incompatible with life, the thought that someone under the name Mitchell could make a mistake in the sky. It's all the same that the eagle suddenly forget how to grab rodents.

Well, you must admit, we all saw this at least once. But the fact is that time goes forward, goes and goes, not sparing our imagination, and ideas, for some reason, do not step in step with it. They become reusable like plastic plates. What to do? How to distinguish an original from a fake now? It is possible that a few years later some minor will say: “Oh, this Top Gan is licked from the Divine Pilots (let's say).”

Answer: you need to watch movies in order of their entry into the world. Of course, this is physically impossible, for example, now, predicting which events go further in the story, I had to constantly remind myself that I was watching the original, and not “the next one”.

What conquered me in this film?

From the very first shots - airplanes. The scope of their wings, their frantic flight, a beautiful panorama of the sky and soaring iron birds. I didn’t think I like to watch flying planes so much, but the preparation of the runways, the snap locks and the uninterrupted screams of the pilots brought me into a euphoric stupor.

A beautiful picture, rich colors that look a hundred times better than modern films, create this unique spirit of drive and the presence of meaning, which was so rich in the eighties, who gave birth to both Freddy and Aliens, and the Armor of God. Do you feel All these are masterpieces.

More about the plot - which is good from an aesthetic point of view - there are no sharp corners in the film. What villains are there! This movie is about friendship. Val Kilmer, in my opinion, is a wonderful actor with a repulsive appearance, here too young and even pleasant, he also turned out to be a very wow guy. Moreover, not at the very last minute, when Maverick saved his trololo, but somewhere in the middle of the film. And the death of Hus was shown without fractures in Pete’s character, typical of labeling, without fights with a closet and other furniture.

But then again - the line with the girl is somehow blurry. Charlie kind of tasted Pete's impudence, but returned. Because he is the best of the best. So think about how it looks.

And for the soundtrack, they got an Oscar! This is just a class. Music in Top Gan can compete with the Nightmare on Elm Street and even with my beloved Supernatural.

I would clearly draw two semantic lines: airplanes and growing up. Of course, in a picture of such a plan one cannot do without a struggle with one's own character and some stagnation. I would say to Maverick “Only cowards retreat,” and that would suit him best. Didn’t he understand this himself? That is how he lived and, in the end, this is what he did. I mean, I didn’t give up. Well, thank you very much, people, for not rushing around the flight school and clinging to each skirt with the question, “What did I do wrong? Ah, it's all my fault, the punishment for me, fell on me, the sky. "

It's time to take stock.

Everything is going to Tom. And the form, and without form, and fear, and Skoda. He is a true legend, where is there to cling. And his puny seventy meter here looks like the most colossal dignity.

And all the work is just amazing. Top Gun seems even a little naive with his pathos not yet eaten up. They say that it was a polished order to raise the American spirit. Well, I was born much later, the validity period of the propaganda has already passed, so for me it is just Top Gun, a charmingly hot film, with its own core and a wick peculiar to America.

But you know what is the most important thing in the film? My main motivation to put it on top of my own charts was the thought that he drove into me. I want to achieve something in life. I want to be the best at something, so that the horizons are open. Just like these guys.

I feel the need, the need for SPEED