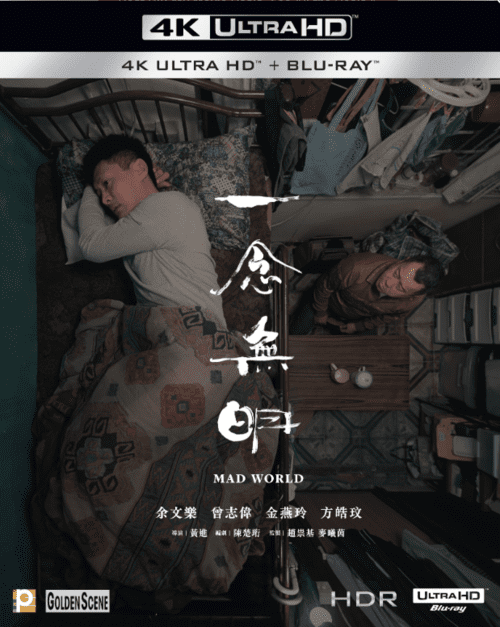 4k movies reviews
There have been few note-worthy films coming out of Hong Kong for some time. It does seem that every other output from the studios is a commercial film that tries hard to appeal to the gargantuan China market. In this sense, debut director Wong Chun's Mad World is an audacious and brave film.

The subject matter is mental illness and it is remarkable that the film never stoops down low to gain your sympathy through cheap histrionics. The film earns it through superlative performances and keen observations. It not only gets inside the mind space of a mental illness patient, it also studies the plight of the care-giver and the bystanders standing in the path of the malady. Neither does the film shout slogans, point fingers or offer pet solutions. Mad World is an indictment on the social stigma and medical agencies, but how it remains deeply humanist is a deft balancing act.

Shawn Yue puts in a career-defining performance as Tung, a bipolar disorder sufferer. His range is commendable and his portrayal totally surprised me. He can start taking on more challenging roles, other than rebellious hunks and rigid police officers. There is a scene of him crying late into the night, every last bit of moisture inside him is pushing out of his eyes and yet he just can't stop. When finally he did stop crying, it is because a precocious little boy who lives next door is whispering a story from Antoine de Saint-Exup?ry's The Little Prince through the thin wall to encourage him. That scene moved me, I doubt Tung can hear the story clearly, but I think at that point he needed to hear a voice from an understanding person.

Eric Tsang as a guilt-ridden father trying to make amends is such a natural. My tears rolled down at a heart rending scene where he explains why he left his family. The reason doesn't make it right, but it is perfectly understandable why he did it. As Tung's illness takes a turn for the worst, his soul becomes a constant battlefield – do I do the right thing or do I do the loving thing?

Jin as Tung's embattled mother and Fong as the ex-fianc?e struggling to forgive Tung are also pitch-perfect. All four, including screenwriter Florence Chan and the director have been showered with nominations at last year's Golden Horse Film Festival and Hong Kong Film Awards, and some of them have deservedly racked up the accolades.

Where Mad World perhaps over-played its hand will be the scenes of the church portrayed as over-enthusiastic zealots and Tung's friend Louis having a turn for the worst at one point. The film felt like it was over-reaching. But I am not taking anything away from the film. This is a compassionate look at mental illness and it looks at the issue from all the angles. I would hardly call it an entertaining film, more of an affective and effective thought provoking piece of filmmaking. Give me thought provoking anytime.