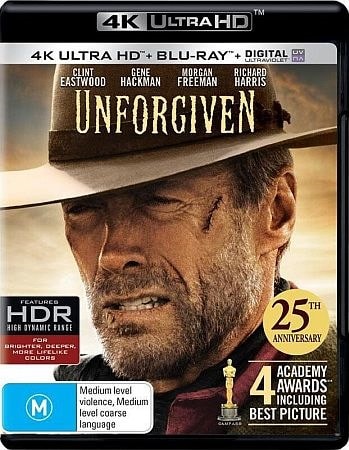 Storyline
The town of Big Whisky is full of normal people trying to lead quiet lives. Cowboys try to make a living. Sheriff 'Little Bill' tries to build a house and keep a heavy-handed order. The town whores just try to get by.Then a couple of cowboys cut up a whore. Dissatisfied with Bill's justice, the prostitutes put a bounty on the cowboys. The bounty attracts a young gun billing himself as 'The Schofield Kid', and aging killer William Munny. Munny reformed for his young wife, and has been raising crops and two children in peace. But his wife is gone. Farm life is hard. And Munny is no good at it. So he calls his old partner Ned, saddles his ornery nag, and rides off to kill one more time, blurring the lines between heroism and villainy, man and myth.

User Reviews
That's right. I'm just a fella now. I ain't no different than anyone else no more.
William Munny (Clint Eastwood taking the lead and directing the piece) is an old and retired gunman who's past misdemeanours would make the devil himself seem tame. Widowed and struggling to raise his two children on a paltry farm, he's tempted out of retirement for one last pay dirt job, the consequence of which provides violence: both physically and of the soul.

Clint Eastwood signed off from the Western genre with this magnificent 1992 picture, the appropriation and irony of which is in itself a majestic point of reference. After the script had been knocking around for nigh on twenty years (written by Blade Runner scribe David Webb Peoples), Eastwood seized the opportunity to play William Munney and lay bare the mythologies of the Wild West. What is most amazing about Unforgiven's screenplay is how we the audience are firmly on Munney's side, we are, incredibly, influenced by Eastwood's part in the history of the Western. In spite of Munney's obvious murky past (despicable crimes they be), we wait (and hope) for Munney to make a quip and way-lay the bad guys; actually, salivating at the prospect is probably closer to the truth. So it's with enormous credit that Eastwood, and his magnificent cast and crew, manage to fuddle all our respective perceptions of the West and the characters we ourselves have aged with. It's not for nothing that W.W. Beauchamp (Saul Rubinek) is the critical character that nobody expected. Beauchamp is a writer of penny pulpy novels that tell of derring-do heroics, gunslingers with a glint in their eye and death dealt like an heroic encore, this gives Unforgiven its excellent sleight of hand, this West is grim and a destroyer of all illusions. Download 4k Unforgiven 1992 blu-ray remux.

Eastwood is greatly served by the actors around him here, Morgan Freeman, Gene Hackman (winning the Best Supporting Actor Oscar for a script he turned down many years before!), Rubinek, Frances Fisher, Anna Thomson, Jaimz Woolvett and an incredible cameo from Richard Harris. Along with Hackman's win for his brutally tough portrayal of Sheriff "Little Bill" Daggett, Unforgiven also won Oscars for Eastwood for his clinically tight direction, Best Picture, Best Editing and was nominated for in another five categories. One of those nominations was for Jack Green's cinematography, which now, in this age of High Definition enhanced cinema, can be seen in all its wonderful glory. The Alberta location is magically transformed into the western frontier, with the orange and brown hues a real treat for the eyes. Ultimately, tho, Unforgiven is a lesson in brilliant film making, across the board it works so well, why? Well because the man at the helm knows this genre so well, having been its sole flag bearer for practically 25 years, and learning from his peers, Eastwood has crafted a thematically complex piece that for all its violence, debunking and melancholy pulse beats, is a film that is as beautiful as it is most assuredly stark, an incredible and true highlight of modern day cinema.
Unforgiven 1992 4K Ultra HD 2160p movie in blu-ray remux.