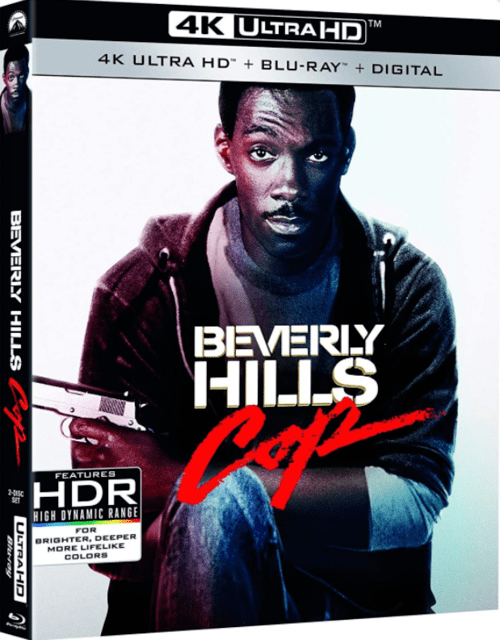 Here he stumbles upon a deaf and stubborn rejection of the upstart by the local police, but with the help of his amazing gift to find a way out of any situation, Fowley enlists the sympathy and, accordingly, the real support of two of them. Lots of fights, shootings, chases, good music and excellent humor.

4k movies reviews
The original comedy script began to be hastily rewritten and refined when the main role was agreed to play the far from comedian actor Sylvester Stallone. The plot was left the same, but the humor decreased in the film, and it became more serious. Stallone also asked to change the name of the protagonist, and Axel Cobretti appeared instead of Axel Fowley. However, then still little-known two friends of the producer Jerry Bruckheimer and Don Simpson wanted to invite the young and promising actor from the TV series “Saturday Night Live” Eddie Murphy to the main role. Upon learning of this, the head of Paramount Pictures refused, as the studio had already managed to get the superstar Sylvester Stallone for the lead role. It was only by chance that Stallone was still unable to take part in the film, and two weeks before the start of filming, Eddie appeared in the project. Again, the script was rushed into revisions, returning it to its original comedic style. All specially rewritten scenes under Stallone in the future were included in the script for the film "Cobra".

In general, the standard story about a police officer from Detroit, going to Los Angeles in search of a friend's killer. But thanks to Eddie Murphy's amazing acting, the film turned into a real hit and served as the progenitor of the comedy action genre.

Eddie Murphy's character is a young and promising detective. Often breaking the law, he infuriates not only his boss in Detroit, but also causes a lot of trouble for the Beverly Hills police. You laugh at times to tears, looking at how deftly and skillfully Eddie gets out of any difficult situation, coming up with another comic story on the fly. As director Martin Brest confessed, he ruined a lot of film on the set due to the fact that he laughed a lot at Eddie's improvisation in one scene or another. But later, many scenes of improvisation, by the way, were included in the film.

The well-chosen musical accompaniment played a significant role in the success of the picture. Here is the world hit Axel F and simply cool songs New Attitude or Stir It Up. I think that after watching the film, many people want to download the soundtrack and listen to all those compositions that sounded in the film again.

And of course, it is worth mentioning a very bright and memorable character from the Serge gallery performed by Bronson Pinchot. The dialogue between Serge and Axel Fowley in the gallery is inimitable.

To summarize, we can say that Beverly Hills Cop is the standard of the comedy action genre and, in my opinion, the best films in the career of Eddie Murphy.