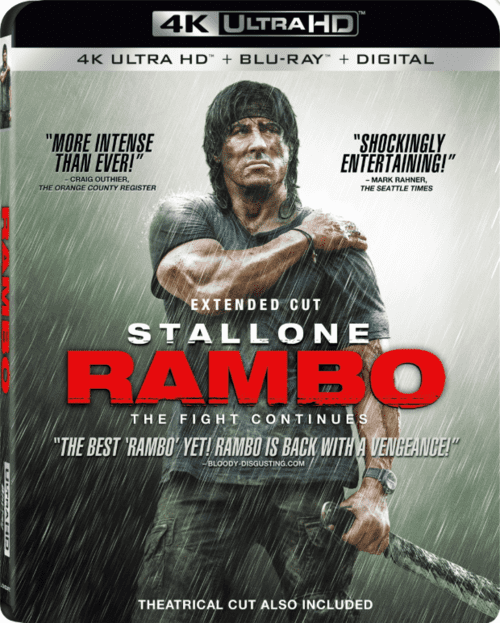 4k movies reviews
It may seem to someone that in front of him is just an ordinary militant, and in addition, shot according to a stamped scenario. Hot spots, hostages, mercenaries, rescue of hostages, rescue of mercenaries - all this has already been seen more than once in low-budget films with the participation of the late Lundgren, Dudikoff and other masters from the category "specal for DVD". Others, accustomed to the magnificent staging spectacle in the glamorous scenery, will glance at the budget line and only sniff contemptuously: “Can it really be possible to shoot a decent action for only 50 million?” Only, provided that the true master will take up the matter.

On the screen, after long flirting with the Cold War ideology, where it was necessary to mercilessly destroy the Vietnamese Reds, and even harsher the hated Russians, the main character of the American-Vietnamese war, John Rambo, is finally returning. Behind the screen, after many weak films and a long absence, its creator, Sylvester Stallone, returns. It just so happened that their new meeting was not greeted with stormy applause and sky-high financial infusions. I had to do everything myself: my own director, screenwriter, producer, and naturally, none other than John Rambo. It is noteworthy that this is the first film about his hero, which Stallone posed as a director, and this largely determined his success.

Like other well-known actors who have successfully mastered the director’s chair - Eastwood, Kostner, Gibson, Stallone does not invent a “bicycle”, but follows the beaten track of his own successful role and his life experience. His hero is aging in body, but only growing in soul. There will no longer be pathetic slogans about justice and the defense of peace, through another war. Aged in body and soul-matured, John Rambo knows that there is no justice in the world, and the war for peace is as disgusting as just war for the sake of war.

But on the other hand, he can catch snakes, fish, work as a ferryman, but deep down Rambo knows very well that there is only one craft, one occupation, one vocation, which he knows how to do better than others. And he agrees to the request of the missionaries, not only because he pity them, but also because he, as a drug addict, goes to the pharmacy and is drawn to these “hot spots”.

The direction of Stallone is filled with amazing energy, it is as dynamic and furious as his own hero. Perhaps, “Rambo 4” is almost the only film that manages to convey to the viewer the bestial cruel spirit of the modern local conflict.

There is no relishing cruelty in lightning blasts scattering in different directions, but they perfectly convey all the primitive savagery of these dynamic fights. Inherent in Hollywood gloss and some cardboard glamor in Stallone is absent. Looking at the screen, I don’t really want to hide in delight or turn away from disgust - everything is filmed, almost impeccably - tough, dry, dynamic. And the fact that the script is not at all original is the tenth thing in this film, which you do not pay attention to at all.

Separately, I want to note the very expressive camera work of Glenn MacPherson. And the wonderful music of Brian Tyler. And especially: the eyes of John Rambo himself, when standing behind a machine gun, without pity and compassion, he pours lead on his nameless enemies. And so much of everything is reflected in them at this moment: anger, rage towards the enemy and colossal contempt and self-hatred for the fact that of all his vocations and professions this is best obtained. The work of his whole life.