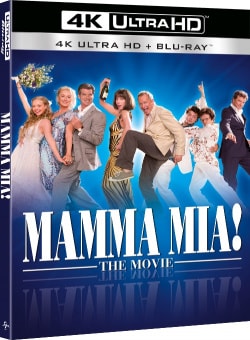 Story Movie
Set on a colorful Greek island, the plot serves as a background for a wealth of ABBA songs. A young woman about to be married discovers that any one of three men could be her father. She invites all three to the wedding without telling her mother, Donna, who was once the lead singer of Donna and the Dynamos. In the meantime, Donna has invited her backup singers, Rosie and Tanya.

Mamma Mia! 4K Review
Went to see Mamma Mia without particularly high expectations. Not being a big connoisseur (or even fan) of musicals, I didn't really know what to expect. Though I adore ABBA, I never bothered to watch the stage production of Mamma Mia. But having a cinema membership, I didn't have much to lose (no money, at least), so I went for it. And boy, am I glad that I did! I can safely say that I enjoyed every second of it. And I'm not even ashamed to admit it!

Give Meryl Streep another Oscar and get it over with already. If she could get a nod for the Devil Wears Prada, she definitely deserves one for this. She really let her hair down on this one. Mrs. Streep can obviously not pass for a trained singer, but somehow, it just doesn't seem to matter. It just really worked in the movie (unlike -say- Helena Bonham Carter's singing in Sweeney Todd). When I heard Meryl's rendition of "The winner takes it all" in advance, it lowered my expectations considerably, but in its context, it totally made sense.

Most of all though, this movie was just sheer fun. People were clapping, laughing...Rarely have I seen an audience as enthusiastic. The crowd especially responded well to Meryl and her two cronies (arguably the strongholds of the movie). Also, because I had never seen the musical before, I was amazed (and amused) at the inventive ways in which they managed to incorporate so many ABBA-songs. Equally brilliant was the way the extras (usually some Greek old women) were deployed throughout the movie...And then of course the setting (beautiful Greece) was mesmerizing...

Basically, Mamma Mia is a superb musical that doesn't take itself too seriously. If you're just a little bit crazy and want to have a good laugh, if you love ABBA, want to see Meryl Streep like you've never seen her before or if you simply have a secret crush on Colin Firth and/or Pierce Brosnan (his singing was nothing short of hilarious), you will LOVE this movie. Best summer flick so far. Warmly recommended.