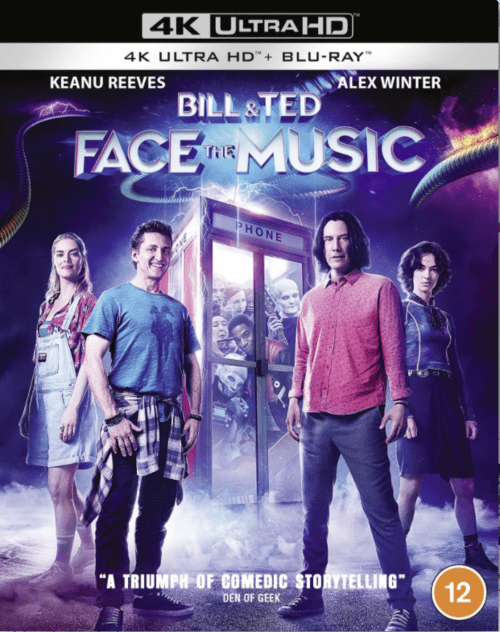 Bahamas | USA Comedy 4K / Adventure 4K
Producer: Dean Parisot
Cast:Keanu Reeves, Alex Winter, Kristen Schaal, Samara Weaving, Brigette Lundy-Paine, William Sadler, Anthony Carrigan, Erinn Hayes, Jayma Mays, Hal Landon Jr., Beck Bennett, Kid Cudi, Amy Stoch, Holland Taylor, Jillian Bell.
IMDB 6.1
File Size 46.62 GB
Film description
Taken from IMDB.COM
Bill and Ted all their lives believed in the prophecy that their rock and roll would save the universe from destruction, but they never wrote a great song. When a global catastrophe is already on the nose, and space and time are shifting in the world, Rufus's daughter Kelly takes her friends into the future, where they learn that they have 77 minutes left to save the world. And then they go to the future to steal the song ... from themselves. Meanwhile, their daughters Thea and Billy decide to help their dads and, having borrowed a time machine from Kelly, they begin to collect great musicians of different eras.

4k movies reviews
Big-bellied Keanu Reeves in blue tight leggings ... Now I saw everything! Modern cinema cannot surprise me with anything else. This is a culture shock worse than those 'Emmanuelles' of yours in the video dealerships of the late 80s!

The last time I saw the Bill and Ted movies was in the early 90s. Since then I have not reviewed it, but I remember that I really liked them. The main thing that the creators of Bill & Ted Face the Music managed to do (the Russian translators seem to have become completely lazy and insolent) is to preserve the spirit of those films. A concept, so to speak. But this is only half the battle.

And the authors took a risk, and went even further, namely, they did not include vulgar jokes and toilet humor in the picture. This is already a feat according to modern standards! The humor in the film is not so much straight from the 80s, but at least from the early 90s, when they worked on jokes and did without boundless vulgarity.

Yes, you can't call carbon monoxide humor. It is based on the talent of the actor and the position in which he finds himself. And I was happy to read that both critics and audiences greeted the film warmly. Hopefully it will pay off and be a sequel. It is difficult to say how the new generation will perceive the film, which has not seen the first two films. But it doesn't matter. Let them perceive as they want. Bill & Ted Face the Music has its own audience.

And again a plus - in a relatively small budget for such a budget, they managed to include a pretty decent visual. There is not very much of it, but all the same, respect!

Now the main thing is the actors. Did Alex Winter and Keanu Reeves manage to make them scream 'I believe!' After all these years? Me yes. They do not exactly shine and burn out, but they play quite cool for themselves. As they say, they get out due to professionalism.

There are also their daughters in the film, and the actresses who play them are also in place. They revive, make you laugh, support the plot.

The bottom line. After almost 30 years, I wanted to revise the 'classic dilogy' as gritsa. And then look again at Bill & Ted Face the Music. Another plus for this film. which does not burden the brain and makes one believe in modern comedies, albeit with a touch of nostalgia.