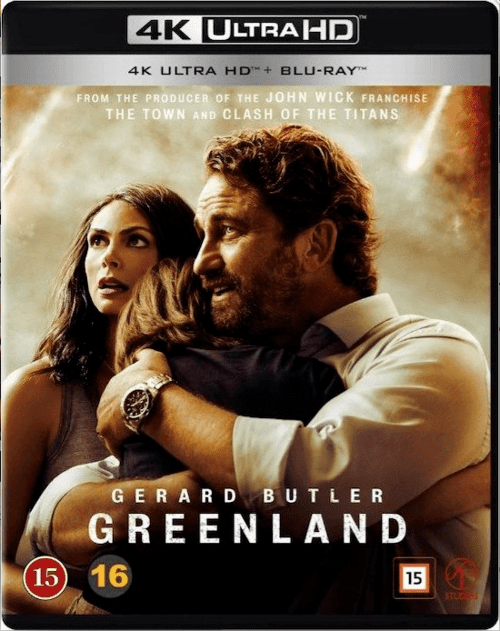 USA | UK Movies / Thrillers 4K / Drama 4K
Producer: Ric Roman Waugh
Cast:Gerard Butler, Morena Baccarin, Roger Dale Floyd, Scott Glenn, Randal Gonzalez, Rick Pasqualone, Nicola Lambo, Alan Pietruszewski, Scott Poythress, Claire Bronson, Madison Johnson, Gary Weeks, Tracey Bonner, Merrin Dungey, Brandon Miller.
IMDB 6.3
File Size 58.91 GB
Film description
Taken from IMDB.COM
All the media are talking about a comet approaching Earth, and civil engineer John Garrity is more concerned with how to save a crumbling marriage. Today they are having a party with the neighbors, and after going to the supermarket for groceries, John suddenly receives a presidential message that he and his family have been selected for rescue in a secret bunker. At first, he does not attach any importance to this, but soon the shock wave from the collision of the first parts of the comet with the Earth rolls to their quiet suburbs, and terrifying footage of destruction begins to broadcast on all channels. Sitting with his wife and son in the car under the bewildered gaze of neighbors, John hurries to the airport, where they board the cargo planes who received messages.

I won't be original if I say that Greenland is less of a disaster film. For the most part, it is a family drama about building strong relationships from the ruins of everyday life.

In turn, the leading actor Gerard Butler (John, father of the family) did not disappoint. His hero visually and emotionally absorbs the viewer to the end.

Morena Baccarin (Alison, John's wife) - stunningly beautiful, feminine, when you need to be as strong in spirit as possible, the best performer of a loving mother and devoted wife, after such a performance it is difficult to imagine.

Roger Dale Floyd (son of John and Alison) - this guy did an excellent job of his role both in a relaxed family atmosphere and in dramatic scenes of dangerous situations.

And who filled this film with a soul to the end - Scott Glenn (Alison's father). His short presence on the screen filled what was happening with the necessary philosophy, an understanding of what all this was for. His performance is rewarding.

The visual enjoyment of the views of the island, which gave the title to the film 'Greenland', is allocated 1.5 minutes out of 1.5 hours of tape. This moment is not that frustrating, but surprising - a fact.

In general, throughout the entire film, the thought does not leave that the theme of restoring family ties, on which the idea of the film 'Greenland' is based, would look more logical in a less global environment than the destruction of the world.

Technically the film is 'temple'. The background is always blurred on the screen. The brand of beer that Alison's father's friends drink is clearly visible, and it is never clear what is happening behind the backs of the main characters. There were not enough views of the instigator of events (comet 'Clark') from space striving towards the planet Earth. Not enough, I repeat, a couple of minutes about the history of Greenland, with its magnificent landscapes. The catastrophe "through the eyes of the heroes" was not enough - each attempt to plunge the viewer into the events of Armageddon ends with the "camera running away" to the side, as a result of which the viewer does not feel the catastrophe, but looks like on TV.

In the dubbing, they also managed to play a trick, at the beginning of the film the actors discuss the running of the main character on the simulator in miles, and later, the same figure is mentioned in other conditions already in kilometers. Although, the very idea of the parallel drawn between these scenes, I liked.

In revenge, with my head, I had enough feelings. The emotional component of the film is at the highest level, every dialogue and look of the actors is shivering.

The only thing you want at the end of the film 'Greenland' is to start a family ... And then, do everything to save it.