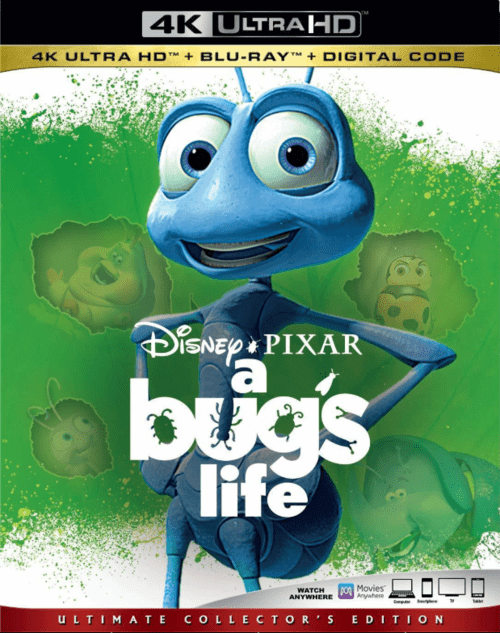 4k movies reviews
Filming about ants, unlike butterflies, mosquitoes, or water strips there, in my opinion, is not very difficult. The same society, the same material needs, to carry to the anthill all that is necessary and not necessary, hierarchy, and so on. As a result, you can easily remove anything from a love story to an action movie and everything will pass, because in these arthropods the humane surrounding is easily guessed.

Perhaps only Pixar and Disney can take the archetypes that have snapped up, take the already seen scenic moves and give something new or almost new to the mountain. Well, where didn’t we see the various rogue eccentrics, the fierce devourers of the people's good and the mega battle in the epilogue, where everyone knows that good will triumph. So what. But we still watch such films and cartoons and experience and rejoice with the heroes. And perhaps this is correct.

Everything would be fine, but when we say we have one unlucky loser, that’s fine, we even wait for him, but when they’re half the movie here, I think it's overkill. Well, the deliberate linearity and recognition of many moves, also somehow does not add joy. Yes, and there are moves, well, let's say so - questionable ... And, nevertheless, I will express a very unexpected thought - from Western cartoons about ants - I liked this one the most.

To begin with, he is unusually beautiful. The color scheme, a variety of locations, picture quality, especially you will feel it if you watch in HD.

For the screenshots here is a feast. For all occasions.

I really liked the work of designers, especially in the city of beetles. And arthropods themselves are extremely diverse.

Variety ... uh ... genres. Most comes as a comedy, but there is more than one shot when children can really get scared. Take for example the scene of the appearance of locusts from the fog. Luxurious and gothic.

Dialogs. A variety of insects annealed at every step. Although what was going on outside the ant island was three heads more interesting than what was basically the epicenter.

Those who watched the cartoon to the end ... I do not mean until the moment the credits appeared, but to the end, they will understand what I wanted to write about, I won’t tell the rest. And it’s not interesting.

Positive. It goes without saying that from the family cartoon we are expecting just the charge of something sunny and optimistic. Here everything is in full.

Total. I’ll put the cartoon one point more than I originally thought, for I repeat that about ants - this is the best cartoon. Just don’t talk about it to those who followed the adventure of our ants - they will bite (emoticon).