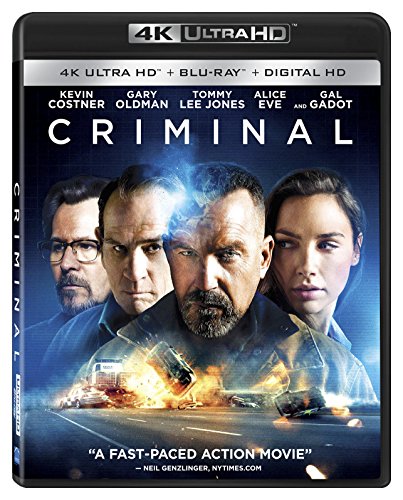 Stroy Movie
Bill Pope (Ryan Reynolds) is a CIA agent on a mission in London tracking down a shadowy hacker nicknamed "The Dutchman." When he gets mysteriously ambushed and killed, an experimental procedure is used to transfer his memories into dangerous convict Jericho Stewart (Kevin Costner). When he wakes up with the CIA agent's memories, his mission is to find The Dutchman and make the deal with him before the hacker launches ICBM's and starts World War III. But complications soon arise and the mission turns personal.

Criminal 4K Review
"Criminal" (2016) is kinda "been there saw that" type of flick - nothing original, nothing super exciting, but as a one evening guilty pleasure it does it's job, at least partly.

The cast is superb, and everyone did their OK jobs for the material, except for Tommy Lee Jones - this is "you got to be kidding me" type of performance - he goes with one facial expression during whole flick, expression that says "what am i doing here? what is this thing?".

Overall, nice execution and OK story with some fun acting makes this flick work for one boring evening. There is even some descent music in it, the one in the van and the one at very end - closing song was great.
info blu-ray
Video
Codec: HEVC / H.265
Resolution: 4K (2160p)
HDR: HDR10
Aspect ratio: 2.39:1
Original aspect ratio: 2.39:1