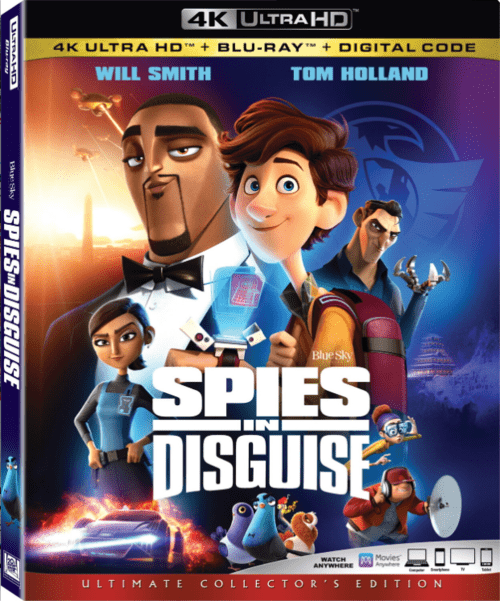 4k movies reviews
When you see these eyes bulging and absurd, but catchy forms of characters, you immediately understand: this is another product of the studio Blue Sky ("Ice Age", "Rio").

“Camouflage and espionage” from this studio is what you certainly did not expect, but your children have already fallen in love with in absentia. Perhaps, because the studio does not change itself and generously gives both pleasant and exciting, and extremely uncomfortable moments.

So, before us is a parody of a bondiana for the smallest. A kind of "Austin Powers", only more cartoonish that the cartoon for a family audience, in general, is even necessary.

Lance Sterling, a bond-shaped special agent who perfectly solves any tasks to capture villains, is trapped. And the only one who can help him is Walter, who invents the most ridiculous but effective gadgets.

Yes, “Camouflage and espionage” is a typical buddy movie in which a child and an adult will not be bored, and the main thing in this and similar works is fun and entertainment.

The most interesting thing is that the roots of such a parody of Bondian and "impossible missions" sprout from a short film as much as twelve years ago. It was called Dove: Mission Impossible. There, the bird was creating real chaos in the city streets, clicking with its beak on the big red button in the spy bag.

Pigeons in the new work of Blue Sky are also available, but in what way - you will find out in the movies. I can only say one thing: the birds in this film are the source of the most unfunny gags. There are not many of them, but without a spoonful of bad (for the taste of an adult) jokes, a cartoon, probably, it would not have come out.

It is much more interesting to watch the running of our Bond and Kew. The characters are remarkably complementary, and they are also literally copied from the voices voiced by Will Smith and Tom Holland.

“Camouflage and espionage” is a conceptually interesting studio work that can be looked at with great interest by the whole family. Blue Sky is well aware of its audience and, although very small, secondary in their gags, but, nevertheless, maintain interest in the film until the last frame.