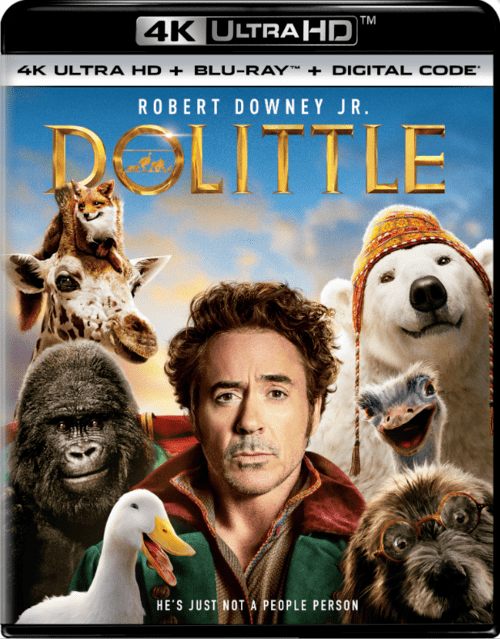 But when an unknown disease becomes a threat to the life of the young queen, Dr. Doolittle has to leave his shelter and embark on an incredible journey to the mythical island. In search of a medicine for the queen, he will fight with merciless enemies, get acquainted with outlandish creatures and will be forced to show remarkable courage and ingenuity.

4k movies reviews
The picture tells about the world famous character Dr. Doolittle (Robert Downey Jr.). He has a wide range of medical interests, but his main patients are animals, whose language the doctor understands without problems. Despite the brilliant practice of traveling around the world, Doolittle becomes a recluse, losing his wife Lily (Kasia Smutnyak) in a terrible storm. However, not to die from loneliness in his huge house, his faithful friends help him - the animals whom he once helped. They cook food for him, wash, keep order, and the gorilla Chi-Chi (Rami Malek) even plays chess. But Doolittle does not conduct medical practice. But one fine day, the young Princess Rose (Carmel Laniado) comes to him with a request to help heal his mother, Queen Victoria (Jesse Buckley). Dr. Doolittle and his loyal friends have to go on an amazing journey to the lost island for medicine, where they will be in danger and unusual encounters.

Another Disney studio project is designed more for a children's audience, for couples with children. A beautiful and bright fairy tale that will definitely be remembered and liked by little moviegoers. The film does not shine with interesting and original dialogs or a complex, intricate plot. The events of the film are developing rapidly, and the timing is small, so you won’t be bored.

With all due respect to the talent of Robert Downey Jr. the image of a man madly in love with animals was not too successful for him. I saw on the screen a mixture of Iron Man and Captain Jack Sparrow. I grew up when Dr. Doolittle was a family man living in America in the 90s (Eddie Murphy in the 1998 film of the same name). Although I understand that the classic image is exactly the one presented by the creators of this picture.

Computer graphics work wonders, so you can think of any worlds, islands and cities. I can’t say that animals look like alive, but they look very beautiful and bright. Many Hollywood stars agreed to give their voices to animals - the heroes of the picture. For example, Doolittle’s chief adviser - the blue-and-yellow aru of Polynesia - is voiced by Oscar winner Emma Thompson, John Cena gave the voice to Yoshi the polar bear, and young popular actor Tom Holland voices the faithful dog Jeep. I managed to see the picture in the original, so I can safely say that all the actors did an excellent job. Antonio Banderas also starred in the episodic role, playing the role of Rasoulli - the king of pirates, the image turned out to be very colorful. The main villain in the film - a colleague of Doolittle and his main competitor - Dr. Madflay, was talentedly performed by Michael Sheen.

Disney Studio has gained tremendous power in the film industry in recent years, almost every month new films come out. Just died out, "Frozen 2" as the next film of the studio came out. “The amazing journey of Dr. Doolittle” is a kind fairy tale that teaches children to treat animals well, make friends, dream, and overcome difficulties on the way to goals. A great film that will be successful with a family audience, but it is unlikely to cause a positive review from those who gather in the movies for the sake of action and an interesting plot. If you have young children, run to the cinema!