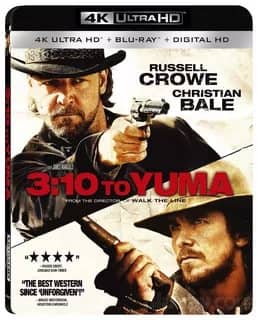 Rancher Dan Evans heads into Bisbee to clear up issues concerning the sale of his land when he witnesses the closing events of a stagecoach robbery led by famed outlaw Ben Wade. Shortly thereafter, Wade is captured by the law in Bisbee and Evans finds himself one of the escorts who will take Wade to the 3:10 to Yuma train in Contention for the reward of $200. Evans's effort to take Wade to the station is in part an effort to save his land but also part of an inner battle to determine whether he can be more than just a naive rancher in the eyes of his impetuous and gunslinging son William Evans. The transport to Contention is hazardous and filled with ambushes by Indians, pursuits by Wade's vengeful gang and Wade's own conniving and surreptitious demeanor that makes the ride all the more intense.

3 10 to Yuma Review
"The boys dressed themselves, hid their accoutrements, and went off grieving that there were no outlaws any more, and wondering what modern civilization could claim to have done to compensate for their loss. They said they would rather be outlaws a year in Sherwood Forest than President of the United States forever." Mark Twain's Adventures of Tom Sawyer

In 3:10 to Yuma, a few references to The Magnificent Seven and the idea of a train arriving at a specific time when good and bad guys converge, as in High Noon, made viewing this Glenn Ford remake from 1957 a pleasant one. And right I was but for even more good reasons.

Not since Unforgiven and The Quick and the Dead have I been as excited about seeing a Western in its heroic and revisionist forms. 3:10 to Yuma is a true Western in the American film tradition about the 19th-century American West: It has clear heroes and villains (and a mixture of those), wide prairies, dirty towns, fast guns, weak lawmen, cunning murderers, kids on the cusp, and women marginalized, just for starters.

Then ratchet up to the philosophical/post modern/post Eastwood reflections on the profession of being a gunman juxtaposed with being a responsible father, and you have an classic angst-filled clash where villain has a wee bit of heart and hero an equal measure of cowardice. Delightfully mix in a certifiable baddie in the Lee Van Cleef/Jack Palance tradition, Ben Foster (Alpha Dog) as Wade's amoral lieutenant Charlie Prince (as in "of darkness"). Best of all, it is nail-bitingly suspenseful and beautifully photographed.

In order to pickup some home-saving cash, poor crippled farmer Dan Evans (Christian Bale) is helping transport murderer Ben Wade (Russell Crowe) to court via the 3:10 to Yuma from Bisbee, Arizona. Getting Wade to the station is no easy task, even for the several deputies, because Wade's evil gang is in hot pursuit and more importantly, Wade is psychologically working on them from within, alternately charming and brutal; just imagine his roguish smile behind an extremely fast gun and unscrupulous conscience.

It's hard to believe a studio could dump such a winner in the dog days of summer. I will say only that if you have even a modicum of respect for this genre, see 3:10 to Yuma and relive the golden days of straight-up shoot-em ups with rough-hewn characters, electric plot, and revisionist attitude about the romance of being an outlaw or a farmer. Get there on time because that movie train goes fast from the get go.