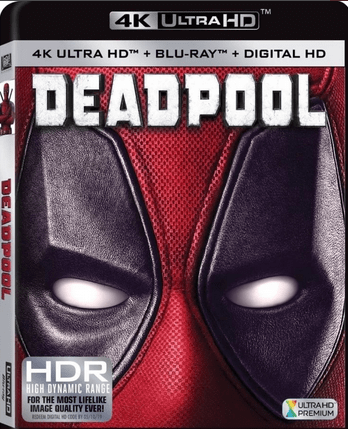 4k movies reviews
Sharp-tongued mercenary Wade Wilson (Ryan Reynolds) dearly loves a girl of easy virtue Vanessa (Morena Baccarin) and is going to marry her. The idyll ends when doctors diagnose Wade with an incurable stage of cancer. In the hope of staying alive, he agrees to take part in an experimental program, whose creators promise not only to cure Wilson, but also to endow him with superpowers. Wade becomes immortal, but his face is disfigured, and in this form he is not going to return to his beloved - putting on a mask and taking the name Deadpool, the newly-made mutant must find the one who turned him into a monster and make him return to his former beauty.

Even if until recently you have not heard anything about Deadpool, then the creators of the chatty 'nonsuperhero' project did everything to correct this oversight. The promotional campaign of the project was unprecedented, either positioning it as a romantic comedy on Valentine's Day, then advertising it with billboards with emoji. Over the past months, it has been decidedly impossible to hide from Deadpool, which has worked well, given that Wilson is one of the few comic book heroes who is constantly in dialogue with the audience and knows that he is being watched by the parties.

This trick is used 100% in the film of debutant Tim Miller, for which the Oscar nominee in the category of animated short films hopes to make his way to Hollywood. The new Deadpool, unlike the silent killer that appeared in 'Wolverine', is exactly what his fans wanted to see. He does not shut up, jokes obscenely and cruelly exterminates his enemies, while managing to regularly remind that he is very happy with the company of spectators.

The destruction of the notorious fourth wall is the highlight of Deadpool, which kind of brings him closer to the public. Like, this guy is talking to you, he is on the board He listens to the same music as you, watches the same movies and jokes the same way. In terms of humor, the film, of course, tries to please everyone and everything: here the film adaptations of X-Men, Hugh Jackman and Liam Neeson are bantering, but at the same time, jokes are often not of the most intellectual kind that would do honor to the inveterate toilet comedy. And it is impossible to establish even a precarious balance between gags of different categories - the scales inexorably tilt in the direction where they laugh at everything below the belt. Is it a minus? Let's make allowances for the specifics of the main character - after all, his head is not all right. And, as practice shows, it is still much easier to attract a mass audience with a vulgar joke beyond the point of a foul than to try to humor subtly and intellectually.

If one can argue about the comedy component - it ultimately turns out to be an amateur - then in visual terms, Deadpool has no problems. The opening action scene is made so ingeniously that it raises the bar very high - it is difficult to reach it in the future, but this is, rather, the problem of the script, which does not offer the main character really serious tests. And with ordinary problems in the face of armed villains (and even the main 'boss') Deadpool copes easily and more than effectively - fortunately, the studio agreed to an adult rating, which allows, without hesitation, to dismember bodies and splash blood in all directions.

Do not expect a twisted drama from Deadpool - this story is simple and banal. And there is really little heroic in it, but a lot of romance, because the main engine of the plot is the desire of a man to look good and to please his woman. Primitivism with a touch of nostalgia, which plays great in contrast to the deeply thoughtful modern superhero films, where issues of a much more global nature are resolved. Deadpool is different and it can't be bad or good - it just is.

With this movie watching: Shazam 4K 2019

The question is, do you like the format of 4K HDR? Do I upload it to the site? Write a response in the comments