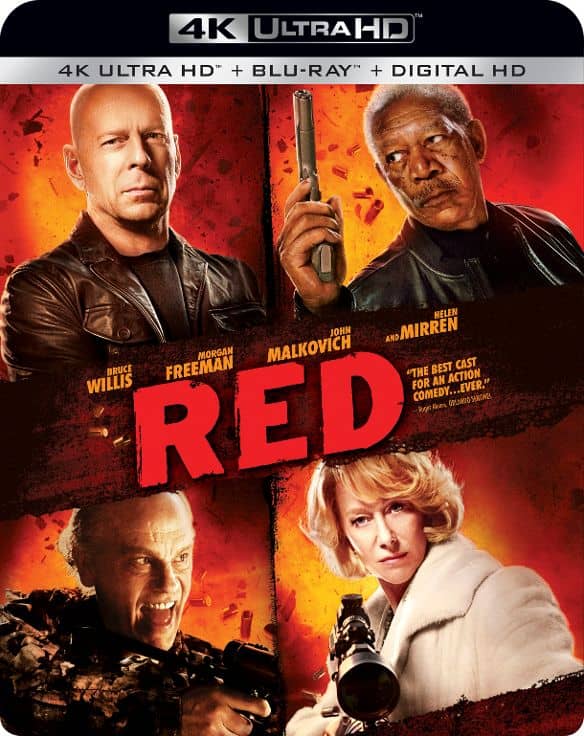 Story Movie
Frank (Bruce Willis) is retired, bored, and lonely living off his government pension in a nondescript suburb in an equally nondescript house. The only joy in Frank's life is his calls to the government pension processing center when he gets to talk to his case worker, Sarah (Mary-Louis Parker). Sarah is as bored and lonely as Frank and marks her conversations with the unknown Frank and her spy novels as the only things fun in her life. When something in Frank's past forces Frank back into his old line of work and puts an unwitting Sarah in the middle of the intrigue, Frank and Sarah begin a journey into Frank's past and the people he used to work with. Like Frank they are all RED ... Retired Extremely Dangerous.

RED 4K Review
Went to watch a preview screening of this last night. I should qualify that I'm a big fan of Bruce Willis especially when he plays this kind of character - a tough guy with a wry sense of humour.

Really interesting mix of genres here - think action/comedy/romance rolled up into one. Just enough romance without being sappy, heaps of action to keep it exciting and the occasional comedy touches which had the whole audience laughing out loud.

It's not going to win any Oscars but don't take it too seriously and you'll be taken along for a pretty enjoyable ride.

Worth a watch - great date movie.