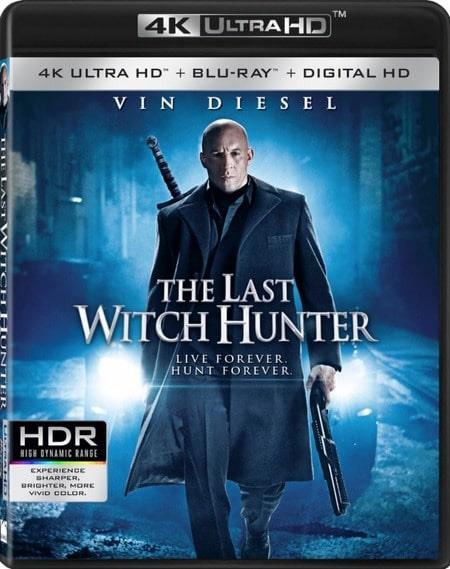 USA | China | Canada Movies / Adventure 4K
Producer: Breck Eisner
Cast:Vin Diesel, Rose Leslie, Elijah Wood, lafur Darri lafsson, Rena Owen, Julie Engelbrecht, Michael Caine, Joseph Gilgun, Isaach De Bankol, Michael Halsey, Sloane Coombs, Lotte Verbeek, Dawn Olivieri, Inbar Lavi, Armani Jackson...
IMDB 6.0
File Size 51.95 GB
Film description
Taken from IMDB.COM
The modern world hides many secrets, but the most surprising of them is that witches still live among us. These are evil supernatural beings whose goal is to send the deadly plague to the world. The Last Witch Hunter 2015 year the army of witch hunters fought with them for many centuries. Nowadays there is only one witch hunter, Calder, who once managed to kill the almighty queen of witches. But Calder does not know yet that the queen has been resurrected and is eager to take revenge on her murderer ...

Review The Last Witch Hunter
For some Vin Diesel - a dashing driver from the "Fast and the Furious" series. For others, this is the charismatic anti-hero John Riddick. This time he got the role of a severe immortal warrior, fighting with otherworldly forces.

The action begins many years ago. A small group of hunters wander to a branching tree through fierce frosts. There they find mountains of corpses and a witch, which became the cause of it, sending the plague through the world. Having sprinkled his sword with oil, the warrior Calder (Vin Diesel) sets it on fire and deals with the witch. That before death curses him for eternal life. So he appears - the main character - the last witch hunter, who can not die. The witch that Calder killed, was the main type, and after her death, the rest have little chance of terrorizing humanity. Therefore, a truce was concluded and Calder now rushes around the world with a sort of sword of justice destroying bad witches and teaching good ones. Calder has a chronicler who is charged with the mission to keep a record of the adventures of the last witch hunter. His name is Dolan, and since he grows old with time, then this post is also passing. Dolan numbered 36 (played by Michael Kane) is giving his post to the young Dolan number 37 (performed by Elijah Wood). But that's bad luck, before the 36th Dolan managed to retire, how he was killed. Calder goes in search of the murderer.

Not to say that the plot shines with originality, but in general the universe is spelled out in sufficient detail. There are people, there are witches with sorcerers. Witches hide among people, and a certain Council makes sure that they do not mischief. If the wizards brawl, they are sent to Caldera. There are artifacts and runes that affect people and the weather. Magic is divided into spontaneous and black - everything is pretty standard. The most pleasant thing is that with an abundance of stamps, what is happening does not cause rejection and is easily accepted on faith. For an easy, autumn action movie, the atmosphere and depth of the universe can even be written in pluses.

Actor's game looks nice. The film has a good cast, reinforced by both young stars and regulars of the big screen. The campaign of Vin Diesel, Michael Kane and Elijah Voodoo was the actress Rose Leslie, who appeared in the series "The Game of Thrones", familiar to the fans of the series as the wild Igrit. Rose looks harmoniously on the screen, the image of the young witch perfectly suited the red-haired Brit. The duet with the low-key Wine Diesel definitely turned out due to contrast. Vin stably depicts a tough guy. The creators tried to write down the story of the hero who lost his family, but with the demonstration of mental suffering the actor never developed. Also starred in the movie star of the well-known in certain circles of the series "MisFits" Joseph Gilgan. His character received a modest, but vivid embodiment of the witch-rebel Ellika. Michael Kane and Elijah Wood received very little screen time and most of it is played smoothly, without surprises.

The maximum attention of the film's creators is given to special effects. All the magic in the film is very spectacular. In the movie about witches and sorcerers, it can not be otherwise. Hordes of insects, animated creatures, otherworldly worlds and other delights of magic are shown often and beautifully.

There are no deep thoughts, the film does not raise difficult topics and does not make you think about the eternal. But you can be pleased to admire the beautiful magic and vigorous action. Ah, yes - you can still look at the bearded Wine Diesel!