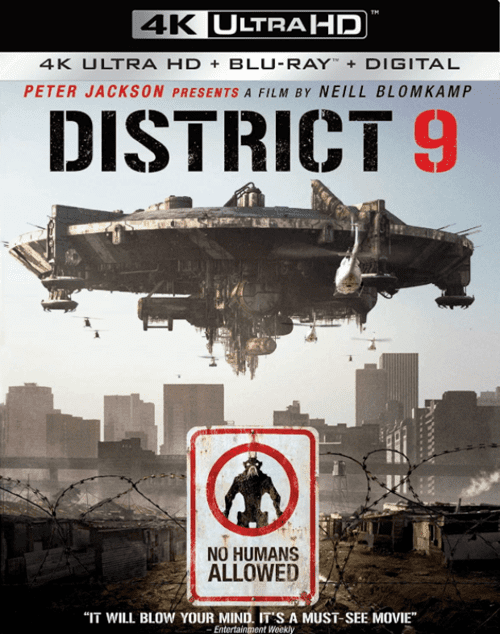 4k movies reviews
Always just what you could not imagine. Confusion. Strong, bright, mysterious, interesting. All because of the complete ambiguity. This is what many felt when they first saw the first trailer for "District 9", which instantly made it clear that they were not going to follow in the footsteps of the modern commercial side of Hollywood, and in the manner typical of Peter Jackson, they created something that aimed at the ideal combination between the interests of both smart and and the mass audience. And if the genius of Peter Jackson has long been recognized by the people, then Neil Blomkamp only had to show his potential for its possible disclosure.

It happens that the interested gaze of a person capable of making something more out of it falls on an outstanding short film. This year the most striking examples of this kind were "District 9" and "Nine", which, in fact, is a kind of fun, from the abundance of nines, considering also what year it is. The idea for the full-length film came from Frances Walsh, wife of Peter Jackson (now suffering from the fact that his house regularly empties the Del Toro refrigerator). Who, while producing the project, could not help but involve his own visual effects studio Weta, which occupies a leading position in everything related to the issue of computer graphics, and by the way, on which James Cameron created his Avatar.

I don’t want to go into the plot details, since it’s dishonest to reveal them here and now, especially considering the secrecy of the film which it follows, and therefore, I’ll say about the result ... What did Blomkamp do with the audience? He shot him over the course of two hours from a huge arsenal of weapons as many times as you could hardly ever imagine. I'm just amazed. It is difficult to remain objective while on an emotional outburst, because where did the film crew get so much self-confidence that it was not known whether they worked on at least some more or less significant projects before - I do not understand. This is the shooting of ladies and gentlemen, an enchanting and heartbreaking combination of both the action inherent in the film and the strongest drama.

From the first to the last minutes, the director almost completely crushes the mind of the viewer, moving on to the subsequent components of human life. He simply does not give the opportunity to look in the hall at a neighbor on the left or on the right, you will forget what it means to yawn, you will wonder why, at first, like a lover of idiotic comments, he quickly shut up and, like everything, went into himself. Drama. Action. Thriller. Fiction. The elaboration of all four genre components is so impressive that it is simply impossible not to feel it. During production, the editing room apparently became a temporary place of great creations, since the editing that we see in reality is simply unimaginable, primarily having a strong influence on the action in the film which is not just the sea, but rather the ocean, and it is of such high quality that it will be enough for several serious fighters. And if there were no R rating here, the movie would have suffered greatly from this, and therefore it remains only to rejoice at the fact that it has not been subjected to the troubles loved by many studios.

A separate paragraph should be devoted to the main character, despite the thoroughly impeccable casting. Sharlto Copely will hook you so strongly that you yourself will not notice how you start to bite your nails, and it’s okay if it’s yours, and then in fact neighbors. A magnificent combination of images from the first to the last minute, which raises a completely fair and logical question about how a simple actor who had never worked in any sensible project before, managed to embody such a serious character by doing it even better than Hollywood stars do for multimillion-dollar fees.

Operator Trent Opalok (who is called Trent in the film), like the others, from the first minutes begins to delight the eyes with the skill that has appeared for us from nowhere, the camera work done is simply colossal and the viewer gets frantic delight from the fact that he looks like a true documentary about such "unusual" events ... And Clinton Shoter, with her soundtrack ... Well, seriously, how could we not have known such talented people before ?!

Peter Jackson. And his Weta Digital Studio. You know, you can guess as much as you like who is a professional in Hollywood, who is not, who is the guarantor of an excellent movie, who is not a guarantor, but one thing can be noted for sure that Peter is one of the people who know what conscience is and what responsibility is. A man who has always truly known how to make a successful film both in terms of film criticism and in terms of commerce. The special effects are simply amazing, and there is a significant comparison when we watch a movie that is actually completely created on a computer worth, say, $ 170 million and when something like "District No. 9" with a budget of $ 30 million manages to surprise us with each new frame. ...

A merciless, cruel, targeted movie that shows how such a wonderful human life can break down absolutely radically and in a short time. A movie about what makes us human. A movie about love, about vivid manifestations of the cruelty of the society around us, about the same simple kindness of soul, about the humanity of our behavior and actions. Banality, you might think, to which I will say, originality, served as it has never been presented before, and it grabs, for every bodily nerve ending striving to know and feel. Thanks to Peter Jackson as the man who managed to put Neil Blomkamp's wonderful and growing talent back on its feet, and this entire crew. I am sure that we will see all these guys again.