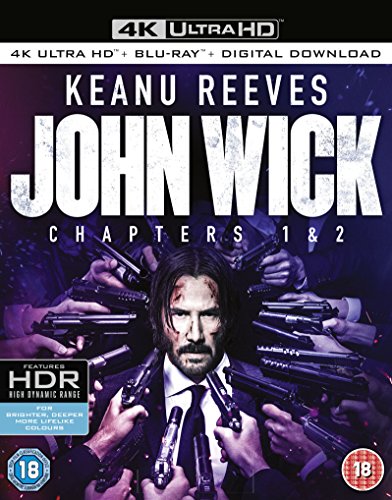 John Wick - An ex-hitman comes out of retirement to track down the gangsters that took everything from him.
John Wick: Chapter 2 - After returning to the criminal underworld to repay a debt, John Wick discovers that a large bounty has been put on his life.

Keanu Reeve is John Wick. He's a deadly and unstoppable hit-man, and it shows. "John Wick" is short and to the point, but so much fun. At 1 hour and 36 minutes running time, there is never a dull moment in what may be one of the best action films of the year.

The film starts off quickly and never stops. It doesn't spend too much time on the backstory or development of Wick's life, yet it still succeeds so well in building up his character. Within the first 20 minutes, John Wick is called out of retirement when three robbers break into his home, steal his car, and kill his dog. Even before the action begins though, the film builds up so much suspense and gravity into who this "John Wick" is, resulting in a satisfying and exhilarating moment when his enemies realize he's back in the game.

While the plot may be simple and straightforward, it works sufficiently in setting up a situation where the rest of the greatness can happen - stylized and awesome fight sequences where John Wick goes through dozens and dozens of kills. Seeing this in digital IMAX really helped boost the mood of the film; the intense sound design and visuals, the slick fighting and choreography on screen. There's this one scene in the film where John Wick assaults his way through a club, and all those elements combined make it an absolutely incredible sequence to witness.

Besides John Wick and his fighting, the film does set up a very interesting world, thanks to all the other little details and characters it brings in. There is an organized system of those on the other side of the law, operating and exchanging "gold coins" while staying at bases such as "The Continental" hotel; this definitely allows room for sequels and spin-offs.

Still, Keanu Reeves is the star of the show, and this is the best I have seen him in quite awhile. Again, the story is straightforward and audiences know what emotional journey to expect, but Keanu displays a good amount of range in his portrayal of Wick that is still nice to see. Just like his character states, I'm thinking he's back. "John Wick" is an awesome and enjoyable action flick that I would recommend.

To put it simply, the movie is fascinating, exciting and fantastic. The dialog, the fight choreography, the way the story moves, the characters charisma, all and much more are combined together to deliver this masterpiece. Such an amazing flow, providing a fusion between the 90s and the new century, it's like the assassins are living in another world, with another mindset, without people understanding it. Just one advice for you though: Don't build an expectation of what you want to watch in this movie, if you do, then you will ruin it. This movie has it's own flow and movement, so watch it with a clear mind, and have fun.
John Wick: Chapter 2 2017 download Blu-Ray REMUX.