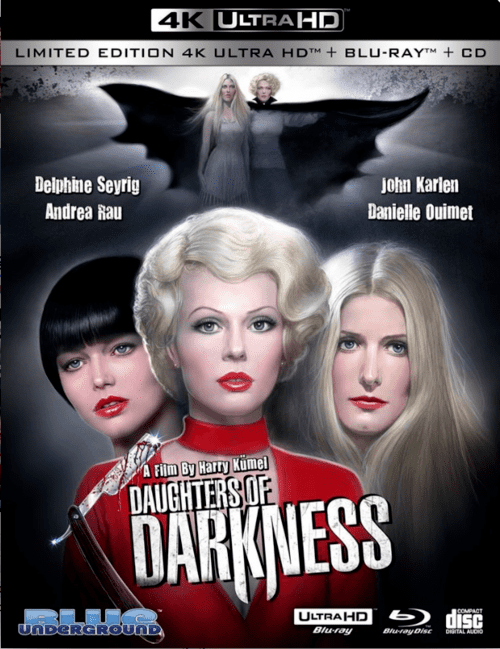 Belgium | France | West Germany Movies / Horror 4K
Producer: Harry Kumel
Cast:Delphine Seyrig, John Karlen, Danielle Ouimet, Andrea Rau, Paul Esser, Georges Jamin, Joris Collet, Fons Rademakers.
IMDB 6.6
File Size 63.71 GB
Film description
Taken from IMDB.COM
Newlyweds Stefan and Valerie, on their way to Britain, stay in a huge coastal hotel, where there is no one else except them and the concierge - winter, not the season. However, soon two more guests settled in the hotel - a certain Countess Bathory and her charming secretary Ilona. The hotel concierge is shocked, because as a boy, 40 years ago, he remembered the Countess's visit, and since then she has not changed a bit.

4k movies reviews
It's worth noting that the camera work is wonderful. The angles are beautiful and graceful. The decorators also tried. Colors are like Vishnevsky's ointment on a wound after modern computer-soulless-digital screensavers. And what a shade of chairs! And the candle lights glare like a rainbow cross on the camera lens. And music, music! These live drums are juicy, neat, tasty, warm organ. My dear Antwerp (it's a pity they never showed it). Brugge is dear to the heart (it's a pity they only showed one street, and that is not the most successful one - it looks very much like Amsterdam). And what girls! Brunette with a hairstyle Mireille Mathieu. Countess with curls and red lips with a bow. A stately blonde Swede with a Howard Phillip Lovecraft face and an anvil spectrum of emotions ... And camera work ...!

... and we also have a warm stove. I love to rest on it so much! My health is not very good: either my paws ache, or my tail falls off ...

The plot of the film is something so alien to common sense or even a sick mind that it involuntarily turns a professionally staged spectacle into a drunken brawl among the regulars of the village of Prostokvashino. Countess Bathory breathlessly recalls chopping off the limbs of virgins, hanging servants by various organs of movement, bathing in jacuzzis with blood and other trivial entertainments of representatives of high society, however, apart from one obscure type of vampire scene closer to the grand final, the sinister countess will feast on only hot rum green (don't ask!), and the corpses filled with life-giving, warm and free blood, throw away without a twinge of conscience! 'What a waste, Shafranek!' (S) ... The aged detective, meanwhile, drives his elderly bike back and forth along the coast, flashes before our eyes, but it is not possible to understand why the hell he surrendered to us, because his influence on the fate the rest of the characters of the tape can only be compared with the influence of Gena the crocodile on the psyche of Freddy Krugger ... The 'mother' of the protagonist, who showed herself in all her glory in the first half of the film, and disappeared irrevocably in the same village of Prostokvashino - well, there are only drooping jaws, saucer eyes and a frantic whisper about 'WTF ??!' ... The impression from viewing, in fact, is quite biblical - as if he had just personally attended the construction site of the Tower of Babel. They began to sculpt the foundation as if cheerfully, but already during the knitting of the reinforcement of the third floor overlap, everyone suddenly started talking in different languages and on different topics - some in French about the legendary atrocities of Countess Bathory, some in German about a lesbian vampire, some in Flemish about detective Colombo, who speaks English about gay sadomasochists. And Uncle Sharik signed all this.

... dear dad and mom, you just don’t recognize me now. My tail is crocheted, my ears are upright, my nose is cold, and my hair has increased. Now I can even sleep on the snow in winter. Goodbye. Your son is Uncle Sharik.