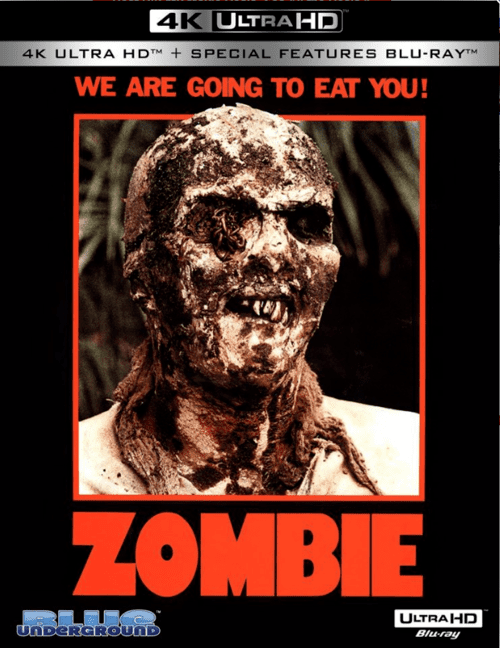 Italy Movies / Horror 4K
Producer: Lucio Fulci
Cast:Tisa Farrow, Ian McCulloch, Richard Johnson, Al Cliver, Auretta Gay, Stefania D'Amario, Olga Karlatos.
IMDB 6.9
File Size 65.74 GB
Film description
Taken from IMDB.COM
An uncontrollable yacht, on board of which there is not a soul, floats into the bay of New York. To check there, two policemen climb up, one of whom becomes a victim of huge zombies, and the second shoots the entire clip of a pistol in this same zombie, after which the body falls into the water.

The press became interested in this unusual matter in the person of the witty reporter Peter West, who enters the yacht at night and encounters her owner’s daughter, Anna Bowles. Anna tells Peter that this is the yacht of her father, a scientist, who went to a tropical island, and which she had not heard about for more than a month. Having decided to investigate all the circumstances on the spot, a curious couple goes to the island, where the zombie epidemic is in full swing.

4k movies reviews
A masterpiece of its genre! One of the best zombie movies I've ever seen.

On one island in the Caribbean, an inexplicable epidemic occurred - the dead began to come to life. Scientists are trying to solve this mystery. And travelers who come here meet with zombies. This meeting becomes fatal for them.

The zombies in this film are of mystical origin. They are everywhere! Nowhere to hide from them and nowhere to run. They roam in search of fresh human flesh, and they will not leave anyone alive. Just one bite is enough and a person becomes the same bloodthirsty devourer of flesh.

The atmosphere is tense from start to finish. The film is very bloody and creepy. Blood, meat, brutal murders, scary zombies - all this in one film. Any viewer who loves horrors will not lose time in vain.

I will not say anything bad about directorial work. Lucio Fulchi pleased both the film “City of the Living Dead” and this. Both films are masterpieces in the genre of horror.

In conclusion, I actually have nothing to add. All that is necessary, I have already expressed. The last thing I will say is that the film is worth watching only to horror fans with strong nerves. But for people with a weakened psyche, this film is better not to watch in any case.