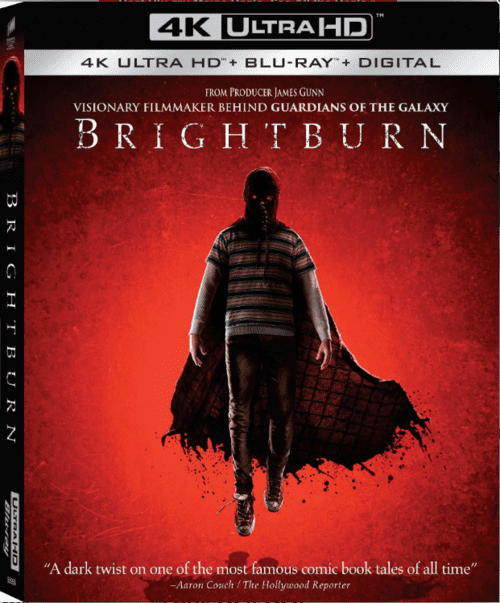 USA Movies / Horror 4K
Producer: David Yarovesky
Cast:Elizabeth Banks, David Denman, Jackson A. Dunn, Abraham Clinkscales, Christian Finlayson, Jennifer Holland, Emmie Hunter, Matt Jones, Meredith Hagner, Becky Wahlstrom, Terence Rosemore, Gregory Alan Williams, Elizabeth Becka, Annie Humphrey, Steve Agee.
IMDB 6.2
File Size 48.42 GB
Film description
Taken from IMDB.COM
Brightburn is a new movie in 2019, watch and download 4k trailer. A married couple of farmers Tori and Kyle have long and unsuccessfully tried to have a baby when suddenly a capsule with a baby falls from space into a nearby forest. The couple adopts the baby and raises him as their own son. Brandon grows obedient, studies well at school and never gets sick. But at the age of 12, the boy’s character changes dramatically - he begins to dare his parents, and hitherto unfamiliar desires and abilities wake up in him.

4k movies reviews
Perhaps localizers thought about this, renaming the original name "Brightburn". This is a small town where a capsule with a baby fell on a dark night. In a few minutes, we see the pink-cheeked childhood of the baby, the happy faces of the adoptive parents performed by Elizabeth Banks and David Denman. And there is a 12-year-old teenager - Brandon Brier (Jackson A. Dunn) with superpowers.

This resembles the story of Superman. The formation of a gloomy personality begins under the influence of a hormonal explosion and an alien call: "Take over the whole world." Producer James Gunn wrapped the heroic plot in a bloody slasher wrapper. He effectively uses the hero’s superpowers to show the maniac’s perverted fantasies. Each deadly episode is executed visually exquisitely: with frightening close-ups, tantrums of the victims. It becomes worse from what he sees that this is creating a child. Actor Jackson A. Dunn, confining himself to remarks: “Clear,” “Clear,” portrayed a guy in the spirit of Joshua from the movie of the same name.

He says tearfully, “I want to be kind,” looking at the frightened mother. Brandon really tries to be normal: he brings flowers to the girl with an apology. He is trying to improve relations with his adoptive father. But still submits to its dark beginning - it becomes a bloody symbol of "BB" at the crime scene.

Unfortunately, Gunn and the company did not get the idea. The beginning of some storylines ends as if they were cut out. The hero himself commits acts that have no continuation. The tape is trying to isolate itself from the mass of successful slashers and the attached surroundings. This would add fan love and those after watching.

Despite the cons, this is a decent movie. For 90 minutes you are not burdened with philosophical reasoning and escalating terrible events. The top of the narrative spins exactly at the speed to throw you into the decisive scene with the only question: “What next?”.

And then I hope to continue. Perhaps Gann and the company will embody on the big screen a dark version of Smallville's Secrets. I recommend evaluating the film to lovers of bloody showdowns and the dark side of power.