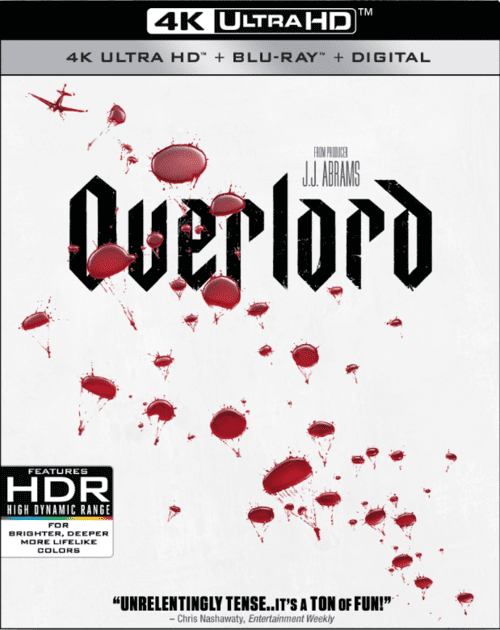 1944 On the eve of the landing of the Allied forces in Normandy, a group of American military, being shot down, falls into a deaf French village. Their goal is to blow up a radio mast, which can seriously hinder the implementation of D-Day. But once there, they couldn’t even imagine what a nightmare they would face.

One of the most pleasant news that came in the process of creating and producing the film was that the producer himself was JJ Abrams. The second was that Abrams said that this film would not be related to the Cloverfield Universe.

For me personally, this film was one of the most highly anticipated in 2018. And this is why - I very, very much adore the subject of zombies. From Romero and Fulci classics to modern Boyle, Snyder and Foster.

This branch of the genre - zombies and World War II (zombie nazis) - was rarely used by directors. The most successful example (before “Overlord” of course) was Tommy Virkola's thrash comedy “Operation“ Dead Snow ”in two parts. It was pretty good, funny, overcooked and bloody trashak with a complete lack of seriousness. And I still consider the ending of the second part to be brute force, even for trash.

Another example is the low budget mystical action-thriller Hell Bunker. An interesting idea was killed by a low budget, partly by staging, etc. Its continuations did not become better.

As for "Overlord" - this is precisely the prime example when everything is done just perfectly within the framework of the genre.

The plot is simple, prudent, clear and extremely clear. There is nothing superfluous, everything is arranged in order and it seems that you are passing a suitable computer game in locations. The plane is like a cut-scene, the forest is like the first mission, the village is the second, the house is the third and so on. Because of this, there are many allusions from Return to Castle Wolfenstein and Call of Duty, which makes this film even better.

The main characters are simple American soldiers and a girl is a resident of a village who sincerely hates the Nazis. Their images in the film are well and fully revealed. And if you compare with this type of games - and even more so. Acting is good, despite the fact that there are no famous actors in the film.

As for the production, everything is fine here. And the most important thing is the budget - because with a couple or even five million dollars it is difficult to make a full-fledged film of a similar subject (again, “Hell Bunker”). Here, $ 38,000,000 was enough for absolutely everything.

From the very first scene, with airplanes, you can see good camera work and installation, as well as high-quality graphics. In the future, absolutely nothing changes, only a new one is added.

This is a cool makeup, especially for a mutant boss, as well as for a couple of experimental results. It is also worth noting that all such aspects are very well dosed. Therefore, the monsters in this film do not look "brute-force."

The same is about action. Shooting in the film is not very much, but they are put very relish. Bullets cut out a huge amount of stone crumbs, blood gushing beautifully, but again - without going over. It also pleases, because a huge amount of krovischis and dismemberment (which is present in Overlord) - the lot of low-budget film, especially of this genre - so the creators are trying to bring at least something interesting to their awkward and often stupid creation. Here all this in abundance but not in abundance. And that's cool.

Of course, there are more explosions, they are beautiful and bright. The entourage is designed with high quality, without an excess of mystical and sci-fi elements.

Monsters in Overlord also dosed quantity. Each of their appearance separately distributed by episode and therefore not tiring. They are made qualitatively, and the final fight with the boss was reminded of the “DUM” 2005, but only in the sense of confrontation between similar characters, and not because of the quality of the production or the stupidity of the plot.

The soundtrack is good, perfectly complements the atmosphere.

And the last - in terms of the reality of the story - if you remove all fiction from the film and recall the Nazis' experiments on people, then we have a story that, without regard to the radio tower, easily had a place to be in reality.

Overlord is a film that exceeded my expectations. Some moments even sunk into the soul and I do not deny that this is to some extent due to my love for the genre.

And in this genre, and in this particular subject, the creation of Julius Avery and Abrams is the best. It is simple and, probably, will scare someone away with this simplicity or it will not please with diversity. But at the same time, everything in it is precisely sustained and dosed, there is nothing superfluous and everything is done qualitatively. And this “Overlord” is beautiful, for which many thanks to its creators.