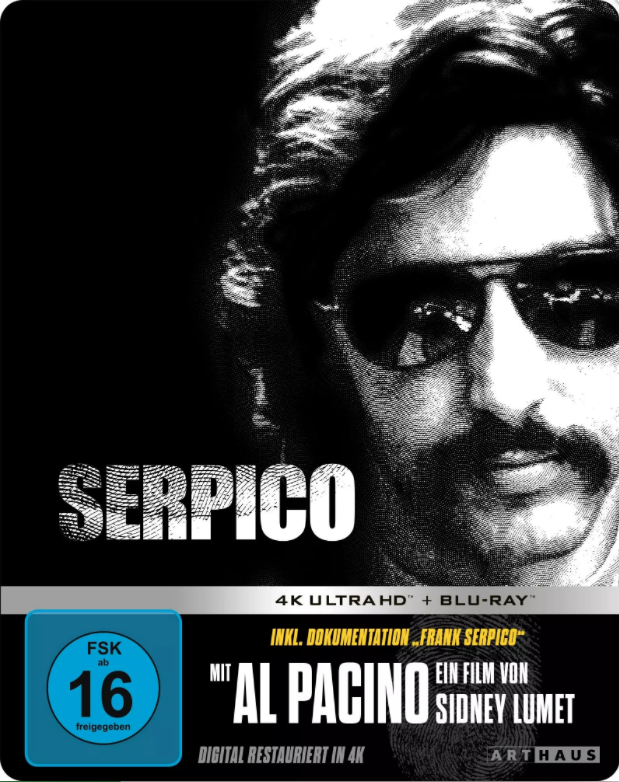 4k movies reviews
'Serpico' is Al Pacino at its best - energetic, vibrant, memorable, literally overwhelmed with emotion. And he gives such an incredible game, despite the fact that this is almost his first main role after the 'The Godfather'. And immediately success is the Golden Globe.

Playing the role of a real-life policeman Frank Serpico, who fought corruption in the highest echelons of power in the late sixties and early seventies, Pacino is incredibly believable, his piercing gaze, speaking more than any words, chained to a petty thief who is about to betray his accomplices is remembered forever.

Perhaps, it will be fair to say that the picture is Al's undisputed benefit performance, one of HIS first roles, roles that blurred the line between acting and a real character for the audience.

Despair, anger, misunderstanding of Frank Serpico, who became an outcast in his own area because of his principles, his persistence, attempts to fight the system, rotten from the most smelly bottom to the all-powerful top, is the drama of a man who suddenly seems to have become superfluous in society. Who needs an incorruptible cop? Obviously not to his corrupt colleagues who are ready to beat a teenager to a pulp for $ 300. Those who are ready to sling mud and blame a person because of his honesty and uncompromising attitude. Ready at the right moment to turn their vile face away from the ongoing lawlessness.

It is not for nothing that Lumet recalls Cervantes in Don Quixote. Serpico is the Don Quixote of the twentieth century. Its windmills are a system with which it is useless to fight, because it will not come out victorious from this fight. And still, with amazing tenacity Serpico pierces the mouth of the mill with his spear, but all he succeeds in doing is to stir up the den of snakes that were just waiting to take revenge on the honest policeman.

He is driven away like a wounded wolf. No, they are not trying to kill him with their own hands. For this, there are pawns, petty criminals: drug dealers, pimps and other scum. You just need not to give a helping hand when the moment comes when everything will be in seconds ...

The leisurely storytelling does not diminish the merits of this powerful drama. On the contrary, a measured rhythm allows you to enjoy Pacino's playing to the fullest, his bottomless eyes that may seem to drill right through you, even through a TV monitor, his cues that burn your brain.

Al could disappear from the screens after 'Serpico' and he would still remain a legend of cinema. Yes, Lumet's film is the pinnacle. One of the many that the acting genius managed to overcome, which has no equal and I doubt that it ever will be.