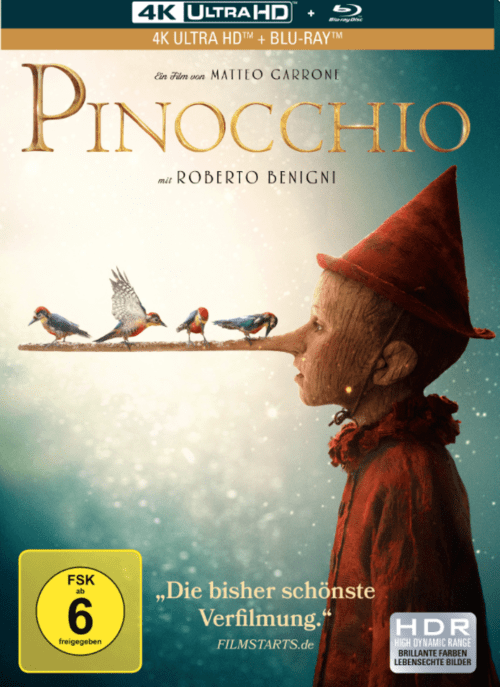 4k movies reviews
You can hear about the film "Pinocchio" by Matteo Garrone: why was it necessary to shoot another version of the old tale, and even close to the text? There were so many of them, both game and cartoon ones, including the Golden Key! To those who, at the word of Pinocchio, say: I know! I saw a cartoon in my childhood! - the new film adaptation is really not worth watching. There were no changes in the plot. You should not take small, too impressionable children to the movies, despite the declared rating of 6+. At times this film becomes a uniform horror movie. Some notions of artists, like a talking fish with a human face, may well appear in nightmares. And the authors do not stand on ceremony with Pinocchio himself, without making a discount on the young age of those who usually read / watch fairy tales.

When we talk about the fairy tale "Pinocchio", we imagine a story that encourages little children to always tell the truth, study well, not be distracted by various dubious entertainments and not talk to strangers. Thanks to Disney, he knew how to turn any content into a fabulously carefree instructive show with big-eyed, snub-nosed characters, funny music and obligatory kawaii animals (the word is not Disney, but you can't find another). Alexey Tolstoy added about a bright future that will come right in your closet, you just need to choose the right key.

Carlo Collodi, author of the literary Pinocchio, written in 1881, wrote an instructive children's book designed to prepare a child for the right adulthood. And it is not only about morality and ethics - this is traditionally done by the church.

What were the little children prepared for at that time? First of all, to the fact that life outside the cradle is not at all a fairy tale, not at all for sugar, and in general is devoid of all these frills, circles, sweets and plush toys. Life is a constant and fruitless struggle against poverty and injustice. Nowadays, everyone is diligently convinced that you need to work hard and hard, study and work, and you will receive honor, respect, money, and wealth. Collodi, and after him and Matteo Garrone, are not afraid to assert the opposite. Poverty permeates all strata of society, not only the village of Jepeto is mired in poverty, even a fairy with blue hair drags out a beggarly existence. It is enough to look at the peeling walls and decrepit curtains, in which the holes are filled with cobwebs. The elderly Dzhepeto himself, a master carpenter, always begs someone to give him some work, he is not a lazy person and not a loafer, but here you go! It turns out that neither study, nor mastery of skill, nor the desire to work guarantee either prosperity or simply a comfortable existence. Even the Fox and the Cat, crooks, are not just the personification of the harmfulness of a marginal type of thinking. They are as poor as Jepeto, forced to beg for a bowl of soup from someone slightly more successful than them. And if life throws up a pheasant, then it must be quickly devoured and gnawed on the bones. Others will devour it. Life is not fair.

And this is the second postulate, which seems to completely contradict the very essence of the tale as we understand it. Injustice as the basis of life. The symbol of injustice for Garrone and Collodi is the prison - the very place for those who are not guilty of anything. Do not renounce your wallet and prison. For you will be judged by an old noisy monkey.

The theme of death looks even more childish. The first thing that growing up children face is with the understanding that everyone is mortal. These days, it is believed that children should not be upset with such topics. But in Catholic Italy of the century before last, life is a short path of a mortal body from nonexistence to the grave. And death is as necessary an attribute of life as, for example, food. And death is present everywhere; and as a direct physical impact - a hanging scene; and as a philosophical reflection - the client is more alive than dead, no, rather dead than alive. The most creepy thing is the slapstick of the undertaker rabbits and their joke-metaphor that a coffin without a dead person, like life without death, has no meaning.

Dust and decay, like ashes from a funeral pyre, sprinkles everything around, mutes the colors of costumes, gathers in the corners of the fairy house, hangs in rags of curtains. The fairy dwelling itself sometimes looks like an old abandoned crypt. Everyone died here. The snail gatekeeper is in no hurry to open the door to the newcomer. And in this world, the miracle of the emergence of a new life happens: like a butterfly from a chrysalis, from a wooden block, first a doll appears, and then a person.

The main thing that Collodi's tale teaches is how to become a human being. The answer is simple - deceptively simple: in order to become human, you must stop being a wooden blockhead. The problem is that the mind, hidden somewhere infinitely deep under a wooden shell, cannot reach neither the cricket-conscience, nor the fairy-soul, nor even more so the parental love of Jepeto. A naughty boy repeatedly makes stupid things, proving that it is impossible to learn not only from other people's mistakes, but even from your own. The little still-not-man needs to try everything, stick his nose everywhere, go everywhere. And they want to make an obedient, correct, 'good' child out of him, in fact, a puppet doll, which adults pull by the strings, forcing them to do the body movements they need. So what is better, to be the right doll, or burning to the bones (in the literal sense) to go your own, albeit not always the right way?

By the way, you don't have to be human. You can, for example, be a donkey - they have a very good life on the farm. Or you can become a parasite by living in the belly of a giant fish and feeding on its juices.

The main thing is, what is it all for? Why become a man if all the same only poverty and death await? Constantly make mistakes, constantly get frustrated looking for something unrealizable. Or, like Dzhepeto, at the end of life to find its meaning in parental love for someone who cannot appreciate it (for the time being). The eternal destiny of our parents is to lag behind their children, trying to teach someone who is already running marathon distances to walk. Jepeto played by Roberto Benigni himself was once such a wooden dummy - really in 2002, and very unsuccessfully (meaning the film "Pinocchio", where he played the title role). Now he has matured, aged, he may not have gained wisdom, but he learned to love even such a wooden dummy as Pinocchio. Such is the metamorphosis involving donkeys.