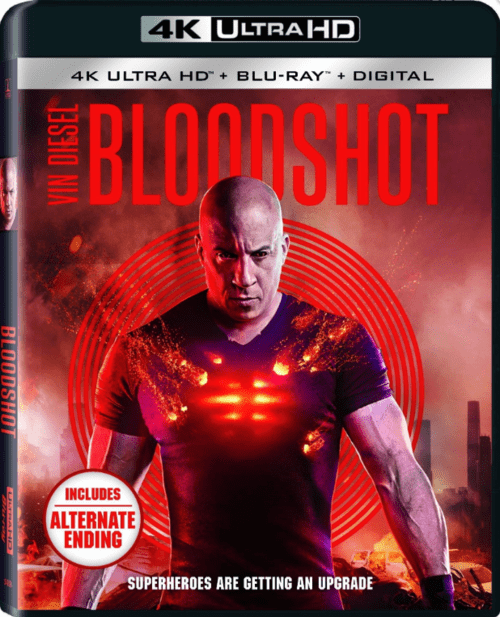 USA | China Movies / Thrillers 4K
Producer: Dave Wilson
Cast:Vin Diesel, Eiza Gonzalez, Sam Heughan, Toby Kebbell, Talulah Riley, Lamorne Morris, Guy Pearce, Johannes Haukur Johannesson, Alex Hernandez, Siddharth Dhananjay, Tamer Burjaq, Clyde Berning, David Dukas, Charlie Bouguenon, Tyrel Meyer.
IMDB 5.7
File Size 45.04 GB
Film description
Taken from IMDB.COM
Military Ray Harrison returns from another hot spot to his beloved beautiful wife. Spouses spend their holidays in Europe, but happiness does not last long - the terrorists, having failed to get the information they need from Ray, kill his wife, and then himself. But soon, RST Corporation brings it back to life. The army of nanorobots in the blood turned Ray into an immortal Bloodshot, and now the soldier is endowed with superpower and the ability to instantly heal himself, only memory leaves much to be desired. But soon the memories of the last moments of life are returning, and Bloodshot goes to avenge the death of his wife.

4k movies reviews
- Sit down, there’s a conversation. Listen, I asked you not to interfere in my affairs. Remember, I don’t like to joke. If you fall in my way again, I’ll shoot like a dog.
“I'll tell you what, Ramses.” Kill me now. If you can. But mind you. If you do not kill me, I will get you out of the ground. And destroy it.

Enough "optimistic" film where fist fights, thank God, not from the very beginning to the end credits, but in moderation. Here is the scientific “chatter” in the background with what is possible for the viewer to understand and accept the technologies of the near future, here is a bloody mess from the bodies in the spirit of the best American examples. In a word, a lively dynamic action movie interspersed with love lyrics to expand the conceptual apparatus of people from 13 years and above.

After the release of the “Universal Soldier” in 1992 with Jean-Claude Van Damme and Dolph Lundgren, the stream of similar products on the audience poured in abundance. Something looks better, something less. Correspondingly, it either settles in memory, hooking on the plot (although what kind of plot can there be in this genre?), While the less talented one is completely erased. Who, when, where, whom they crushed, in a week no longer remember. Yes there is a week, much earlier. Only "The Adventures of Jason Bourne" from 2002 to 2016 in five "series" and can be recommended on occasion as a high-quality, worth watching action.

Bloodshot (2020) is an alloy of "scientific thought and the muscles of a biological being." A reusable soldier with deaths and countless reanimations. A nanorobot with the remnants of the brain in which the "master" periodically digs, turns the nuts with a "screwdriver". Now weakening, then tightening. What is it called now in modern language? Implantation? Yes, yes, she is. Today is one mirage, tomorrow another. And a picture of an illusion. Where is the reality, and where the hell cannot the program understand. You are a puppet. You are a pawn. They say you do. They order you to do it. Well, "a complete moron" as someone will say. What? No other way. Otherwise, to the scrap. Your life, penny.

... dolls pulled by strings,
They have smiles on their faces
And the clown plays the trumpet.
And in the process of introducing
It creates an impression
That the dolls dance on their own ...

The Adventures of Pinocchio (1976) remember? Have you seen? Or any other version about the Golden Key? So here is exactly the same plot in the replay. Think joking? Believe cunning? Well, what are you? How is it possible? Once again, children's classics are transformed into the realities of our days. Who is interested in a “guy” made of logs turned at 13-15 years old? Yes, be he even seven spans in the forehead, finish Cambridge or say there, Oxford, all this is nonsense. It is not relevant. He is boring. He went into circulation. It is necessary to strengthen his “crutches”.

Before us is the Karabas-Barabas Theater. Here “Karabas” is called Harding (star Guy Pearce in the role). Of course, there is Duremar (the one that catches leeches and frogs) is a computer worm of software developments (Siddharth Dhananjay). “Dummies” are settled in a dusty closet (and in ours, respectively, in a sterile clean laboratory). The very ones that are presented for the performance at the behest of the "father's" will. Who was the classic there? Malvina? Pierrot, Artemon? Do not hesitate, they are here. They are always ready to fulfill any role, any team. And then a meteorite crashes into their environment. Who do you think? Of course he is! "Pinocchio" granted. The director calls him Ray (cool Vin Diesel). So, what is next? "Dance" like everyone else? To run errands? No, it's boring. And the plot is filled with adventure adventures. It is worth seeing and evaluating yourself. I can only say that “Papa Carlo” is also present here. There will always be a “good” puppeteer for an evil puppeteer ...

Faces erased, dull colors,
Either people, or dolls.
The look is like the look
And day to day.
I'm tired and relaxing
I invite you to the booth,
Where dolls look so much like people.
Harlequins and pirates, circus artists and acrobats,
And a villain whose appearance inspires fear.
Wolf and hare, tigers in a cage -
They are all puppets
In dexterous and strained hands ...