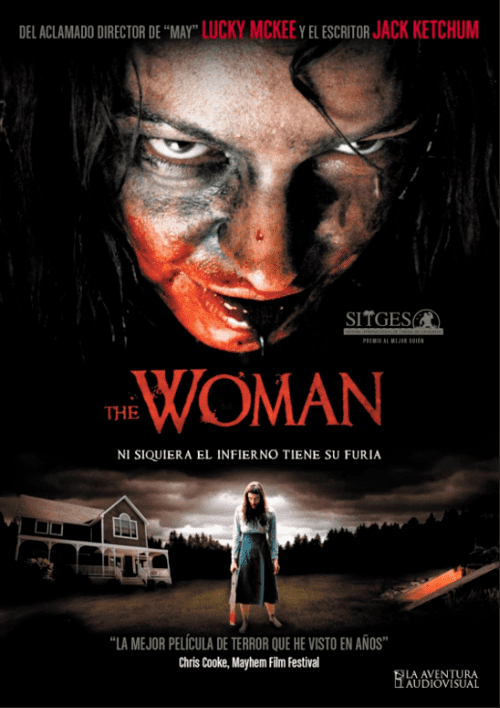 USA Drama 4K / Horror 4K
Producer: Lucky McKee
Cast:Pollyanna McIntosh, Brandon Gerald Fuller, Lauren Ashley Carter, Chris Krzykowski, Sean Bridgers, Angela Bettis, Marcia Bennett, Shyla Molhusen, Gordon Vincent, Zach Rand, Shelby Mailloux, Tyler Merlini, Jordan Carrasquillo, Jordan Chapalonis, Carlee Baker.
IMDB 6.0
File Size 42.55 GB
Film description
Taken from IMDB.COM
The trilogy of films about the wild woman is already available on our website 4k-hd.club. The trilogy includes films (Darlin 4K 2019, Offspring 4K 2009). They are already available for premium users to download. Join us. Chris, a successful lawyer and father of three, finds a wild woman in the woods. Having tracked down and caught her, he brings the savage to his home and fetters her in chains in the cellar, intending to make a civilized woman out of the captive. Chris convinces his wife and children to keep it a secret, but the situation soon gets out of hand.

4k movies reviews
This picture, at first, may seem extremely simple and not original; using the concept of a 'beast in a cage', it is able to send the viewer on the wrong track, giving him hope for the evidence of what is happening and the spectacular exploitation of ostentatious violence, as in many similar films. But it's not that simple. And if we mention that Lucky McKee is the director here, and Jack Ketchum himself is involved in the script, it becomes clear that it is banal to scare the viewer - far from the main idea of the film.

From the very beginning, a bias towards a special aesthetics is visible, which does not set as its goal the entertainment of the viewer, but is designed to create the necessary psychological atmosphere. The protracted psychedelic beginning, and the further unhurried development of events, can lull those who are tuned in to stupid popcorn trash. Although each scene carries the information necessary for the plot, McKee seems to be deliberately trying to create an artificial sense of protractedness, primarily through the abuse of fades, where it is appropriate and not entirely. However, there are no overexposed plans, and each scene is important for the plot, even if, at first glance, some of them seem redundant. For example, we can see how the son of the head of the family, Brian, is intently watching the scene of the neighbors' mockery of a girl, but at the same time does not even try to help her. Peg, his older sister, is withdrawn and clearly preoccupied with something. Father Chris alone seems to be completely content with life. What is happening, it seems, seems quite ordinary, and the viewer, at first, cannot even pick up any disturbing notes.

Against this background, Chris discovers a feral woman in the forest, and begins his 'family project', the purpose of which, as he says, is to 're-educate and adapt a woman to a civilized life among people'. With the development of events, the viewer more and more begin to suffer from doubts about the adequacy of what is happening. And later it becomes obvious. And here it is worth noting that if you remember the beginning of the film, it turns out that the story did not begin with a wild woman in the basement; it only played its part in the chain of events; and the true beginning of the nightmare lies outside the timeline of the film. This film is not about a monster as such - it is a film, first of all, about a family, and about a woman's place in this family. McKee, in fact, skillfully and gracefully uses a form of harsh horror, distracting the viewer's attention, but at the same time overloading the film with direct and figurative analogies of 'woman' with a woman. In fact, it becomes clear that in the phrase "adaptation of a woman to a civilized life among people", under the word "people" - Chris means, first of all, men. Closer to the denouement, this split between the sexes becomes apparent, and we can understand the meaning of that scene with Brian from the beginning of the film that I mentioned. And here, after all, it should be noted that the upbringing of children depends on the environment in which they grow up and what they see. Perhaps genes; and, perhaps, just the desire to be like his father gradually distorts Brian's worldview.

Events gradually lead to a powerful and harsh ending, and the director has an ace up his sleeve here - do not think that you have already seen all the abomination, and the plot will no longer be able to surprise you with something. By the end, the film completely knocks the ground out from under the feet of an unprepared viewer, so I advise the faint of heart, nevertheless, to think about the expediency of watching. For the rest, I can say that despite the uncompromising brutality of some moments and visual ultra-violence in the most vile details in them; 'Woman' is far from your usual horror; the tape is very multifaceted and replete with a lot of subtext.

Of course, in his film McKee inflated the theme of misogyny to hypertrophied limits, while confronting two extremes: the sadistic Chris with megalomania, and the animal guided exclusively by natural instincts. However, the concept of the film, and how the general audience perceives it, makes one wonder why in modern society, shots of beating a woman are considered less shocking than shots of animals eating human flesh.