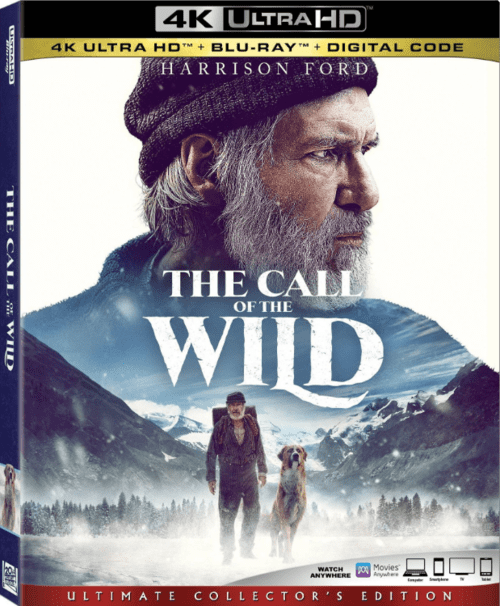 USA | Canada Drama 4K / Adventure 4K
Producer: Chris Sanders
Cast:Harrison Ford, Omar Sy, Cara Gee, Dan Stevens, Bradley Whitford, Jean Louisa Kelly, Michael Horse, Karen Gillan, Colin Woodell, Micah Fitzgerald, Heather McPhaul, Adam Fergus, Stephanie Czajkowski, Abraham Benrubi, Thomas Adoue Polk.
IMDB 6.8
File Size 56.45 GB
Film description
Taken from IMDB.COM
The story of Buck, a friendly dog whose measured domestic life was turned upside down during the gold rush in the 1880s, when he was torn out of his home in California and transported to wild and cold Alaska. As a newcomer to the postal service team, and subsequently a leader, Buck finds himself in an incredible adventure, finds his place in the world and becomes the master of his life.

4k movies reviews
The film "Call of the Ancestors" remained virtually unnoticed in Russian cinemas. But in vain, Chris Sanders did a great and high-quality work on this film. I myself did not know about the existence of this film before I saw it at the box office, and decided to go, as a fan of the works of Jack London.

As I have said many times and will continue to say, a good script is even more than half a good film. This film was full of different plot twists. It was colorful and varied, this is of course the merit of Jack London, and the scriptwriters at that time made excellent dialogues in which there was meaning and interest. But in this film, actions and emotions are more important than dialogue. It is a huge job to come up with different emotions that explain the mood and intentions of the dog. And in fact, it’s worth the effort to make such a movie, to think through every detail so that everything is logical everywhere. Therefore, my gratitude to the scriptwriters for the work done 10/10.

With special effects, too, everything is fine. Let's start with Beck, firstly, it would be very difficult to shoot a real dog, and probably even impossible and it would hardly be such emotions. Secondly, Back turned out to be cool, realistic and emotional. therefore, the creators did everything right. Very often I even forgot that this is not a living dog. Again, referring to emotions, everything is done at the highest level, this is a tremendous work of editors, I believed Beck's every emotion. I don’t know which shots were shot live and which weren’t, they were all like real, so natural and alive, that’s the scale of the work done. I put this point clearly 10/10.

All the actors played well, but everyone except Harrison Ford and Dan Stevens, known to us from the Legion and the remake of “Beauty and the Beast”, sometimes had the wrong emotions or reactions, but it was invisible so I was very nitpicked. Harrison Ford is great, I believed and sympathized with him, and my words will be confirmed by the tears of the audience in the audience, the role of Dan Stevens turned out to be quite interesting, the crazy nut on gold, forgetting about humanity, becomes dumber and dumber, I can only applaud his game. Fortunately, the Russian voice acting did not disappoint me. For such a game, you can bet 9/10.

This film really does not need humor, or rather, probably, any film needs ridiculous moments, not even necessarily ridiculous just some embarrassing, and there were funny moments and they performed exactly those functions that they should. Therefore, due to the uselessness of humor here, and the completely fulfilled task of the available moments with a calm soul, I put 10/10

The atmosphere is incredible, sitting in a movie theater, you find yourself on ice, in a green and beautiful forest madly, in a blue river like sky, in a pack of dogs, in a pack of wolves and all this is so natural and beautiful that your eyes just explode with all these landscapes. The music was also perfectly matched, everything was in the theme, each note emphasized the mood and condition of the characters. Thanks to the creators for such an incredible adventure, 10/10.

In terms of morality, this film has clearly succeeded. He teaches a lot of both young spectators and adults. A third of the film raises the theme of the collective, the unity of the collective is the key to success for all its participants, in the collective they fall together, rise as one, too, with the help of justice, kindness, sometimes even perseverance, you can become the “leader of the pack”, so to speak.

A quarter of the tape says that greed kills people, animals and nature, that is, everything most often leads to dullness due to anger. and sometimes because of greed, people are dumber than animals.

Topics also appeared: you can be defeated, but not broken, that does not kill us, tempers us, etc.

Chris Sanders film is a very soulful film with an ideal script, with wonderful and natural effects, with a good game, with incredible views, great music, and the right morality, which are still relevant today. Of course, I advise everyone to watch it, you will spend a pleasant time, plus also with benefit. my bow to all involved in the creation of this tape.