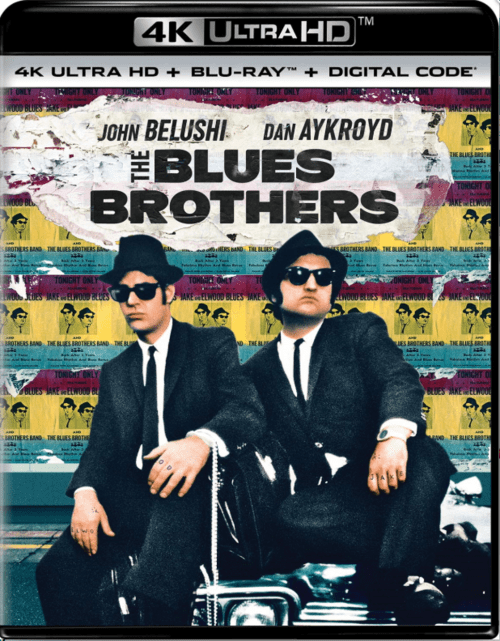 However, Jake just got out of prison, and Elwood has his own troubles with the law, and everyone wants to get to them: the police, bandits, neo-Nazis. Before saving the church, the Blues brothers will make a real mess on the streets of Chicago ...

4k movies reviews
In the distant past, when the perky rhythm and blues was already supplanted by a multi-colored disco, and monochrome rap or hip-hop were just trying on children's pants, the young talent from directing John Landis shot a doublet into the American light. The Blues Brothers.

Dressed in baggy black suits, the brothers, performed by John Belushi and Dan Ackroyd, even went to bed in unchanged sunglasses and felt hats. Image in this business is everything. And even more importantly - the desire to sing their swan song with a gang of musicians bogged down in everyday life. And it’s not at all for the sake of money for the church that our couple increases the volume of police car scrap metal, no. The blues leaves, he stays in the sixties and seventies. And because you want to tear the static world in a format of four by four measures.

The atmosphere of the film was created by the music of truly great people. Of course, for a Soviet and a post-Soviet citizen, Aretha Franklin, first of all, is a funny black woman. And, by the way, this lady became the first woman whose name was listed in the Rock and Roll Hall of Fame. In 2005, she was awarded the highest US award - the Presidential Medal of Freedom. In November 2008, Rolling Stone magazine declared her the greatest vocalist of the rock and roll era.

And what is the figure of Ray Charles! Blind musician, idol of Paul McCartney, Elton John and Stevie Wonder. Rolling Stone Magazine placed Ray Charles at number 10 on his List of Immortals and at number 2 on the list of “100 Best Vocalists of All Time”. Taylor Hackford made a film about Ray with the same name, which received two Oscars and four nominations.

And to the full set of large-caliber performers - blues stars Cab Calloway, James Brown, John Lee Hooker. But this was not enough for the director. And he unleashes waves of endless chases, accidents, shots dumbfounded by the spectators' drive. Frames them with parody tones and hints. Opens the gateways in the selection of extravagant characters - from the new Illinois fascists to the fateful woman with explosives in the guise of Carrie Fisher (Princess Leia Organa from the first Star Wars trilogy). Well, the casting is crowned by three directors in the frame - John Landis himself, Frank Oz and master Steven Spielberg.

And, of course, the leading parties brilliantly performed the Blues Brothers themselves, charging others with irrepressible energy. Only for their dances with unflappable faces is it worth highlighting the film from the legion of the same type of dance and music crafts.

The film simply could not fail. He was well received in America and the rest of the world, critics and anthologists constantly mention him. But they did not caress with awards, and they are not in a hurry to write down to their loved ones. The picture is painfully beaten out of the canons of the genre - it seems to be a musical, but it is very shebutny; as if a crime movie, but instead of machines - guitars overflow; comedy, but the humor is non-standard, without genital-cakeocidal effect. Yes, and the obligatory happy ending is strange - Jailhouse Rock ("Prison Rock").

Nevertheless, the “Blues Brothers” is worth watching (and listening to) even the regulars of the discos. It was this music that was at the source. Although, in modern electronic cacophony, melody practically does not exist, and only occasionally peeps in a fragment of some cover version.

Jake and Elwood Blues did not restart the old blues. Even then they were an anachronism. But an anachronism, evoking only good feelings, despite the loose shell. The world has gone along a different road, but no, no, yes, it recalls the old days. Like this movie.