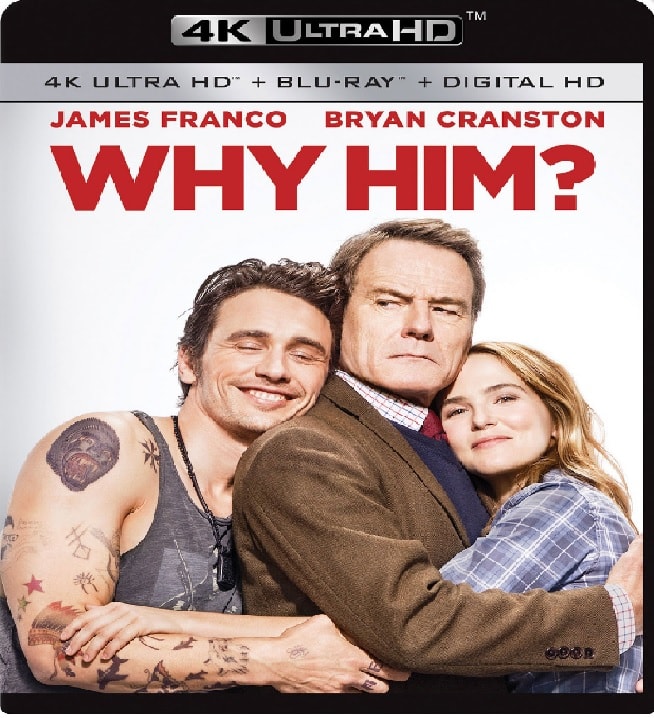 Story Movie
Over the holidays, Ned, an overprotective but loving dad and his family visit his daughter at Stanford, where he meets his biggest nightmare: her well-meaning but socially awkward Silicon Valley millionaire boyfriend, Laird. The rivalry develops,and Ned's panic level goes through the roof when he finds himself lost in this glamorous high-tech world and learns that Laird is about to pop the question.

Why Him 4K Review
This movie has some funny scenes but is not a good movie. The reason: the principal character is so obnoxious that story comes off as jarring. Mayhew, played by James Franco, is affable and eccentric but is pushy, controlling, tasteless and above all stupid. The movie asks the audience to believe that he is a billionaire. That's a stretch. Fleming, played by Bryan Cranston, has legitimate cause to be offended by Mayhew. Mayhew goes out his way to offend people. Mayhew is so abrasive, so lacking in finesse, that it is virtually impossible to believe that anyone would seriously want to be around him. Yet, Fleming's daughter finds Mayhew attractive, for reasons that are never explained. Hence the title of the movie. The problem is the running gag, that Fleming's pomposity is misplaced, is not plausible. Mayhew is nasty throughout the movie. He deserves to be disliked. There is nothing endearing about him. He is a crass materialist who lacks the style. He's not even a smooth talker. He's goofy but not self-effacing. Cut through all the pseudo-street talk, bathroom humor and gratuitous use of profanities, and Mayhew is just another decadent rich guy, and not a lovable one at that. Still, the movie has funny moments, but that was because of Cranston who carries this movie. The funny scenes all involve Fleming, when he is being goofed on. The problem is that in this case the straight man is being goofed on by the comic character who comes off as being not only stupid but nasty. Cranston's performance saves this movie from immediate banishment to DVD land.