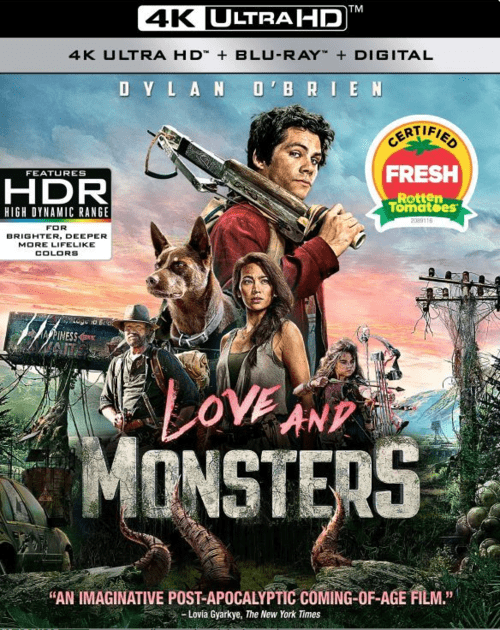 Canada | USA Comedy 4K / Adventure 4K
Producer: Michael Matthews
Cast:Dylan O'Brien, Jessica Henwick, Michael Rooker, Dan Ewing, Ariana Greenblatt, Ellen Hollman, Tre Hale, Pacharo Mzembe, Senie Priti, Amali Golden, Te Kohe Tuhaka, Tasneem Roc, Thomas Campbell, Joel Pierce, Melanie Zanetti.
IMDB 7.0
File Size 51.12 GB
Film description
Taken from IMDB.COM
Seven years ago, mankind blew up an asteroid flying up to the Earth, but after that it faced the consequences - some terrestrial inhabitants mutated into giant monsters. A year later, the population of the Earth has decreased by 95%. Joel's parents died, and since then he has been living in an underground bunker with the same survivors. He recently caught a radio signal from another colony where his teenage love Aimee lives, and now he decided to get to her. And it will not be easy, because Joel does not have any survival skills, and moreover, he falls into a daze at the sight of monsters.

4k movies reviews
Asteroid Agatha 616 flies to Earth. Humanity is uniting in the face of a global threat and is sending all its missiles to detonate it. The joy of success is short, because the chemical compounds from destruction are raining down on the planet and transforming cold-blooded beings into giant monsters. After mutation, they destroy 95% of the population, and the survivors are forced to hide in shelters around the world.

Joel Dawson (Dylan O'Brien) lives in an underground bunker with a tiny group of survivors. Because of his tendency to freeze in the face of danger, all he has to do is milk the cow, fix the radio and cook the minestrone. More energetic members of the colony at the same time make forays to the surface in search of food and ammunition. After Joel contacts his high school sweetheart Aimee (Jessica Henwick), who lives in another colony 80 miles away, on the radio, he decides to go to her.

Love and Monsters by Michael Matthews is the rarest film of our time. It is a fun, creative and mixed genre adventure that was filmed for modest studio money, and is not a comic strip or book adaptation. And while the picture is not based on pre-existing material, there is no denying the fact that it was conceived by people who know too many post-apocalyptic films, for people who have seen too many post-apocalyptic films. But this is not only a horror about the end of the world, it is also a growing up story and action adventure from the 80s. Joel and the Kid (the dog he meets on his way) are reminiscent of the "cult duo" (as the protagonist calls them) from 1974's The Boy and His Dog, a darker survival fantasy in a post-apocalyptic world. The meeting with Clyde (Michael Rooker) and Minnow (Ariana Greenblatt) will briefly transform the movie into "Welcome to Zombieland", underground worms will inevitably remind of "Tremors", and Joel's bathing in the river with leeches repeats (with minor reservations) a scene from the film adaptation Stephen King's "Stay with Me."

All of these cute references prove the great care taken in the film, but behind them is a thoughtful design and script that holds Joel's adventures together and prevents him from turning into a gaudy movie that comes out on our screens at regular intervals. The script frees Dylan O'Brien from the harshness of The Maze Runner and gives him a chance for a frantic slapstick. He fills the space with comic energy and optimism and helps the picture to penetrate the soul. He has an unexpectedly touching talking robot scene that has an all-conquering sincerity. But not only the main character is endowed with sufficient purposefulness and personality. Even the most ordinary monsters also have the same qualities, so that Joel's world seems like an intriguing special place full of incomprehensible risks, and not just an obstacle course leading him to his beloved. The creature development team clearly had a good time. It's nice to meet such a variety of low-fi monsters in an era when everyone else creates monsters that resemble xenomorphs (see "Monster", "Quiet Place").

It is a shame that Love and Monsters will not be able to be seen in theaters. But we should be happy that someone can still create a film from which it is potentially possible to build a compelling cinematic universe, and squeeze it into a 100-minute timeline. And may after that we want more than if we received an 8-episode series that we would like to beg for a quick completion.